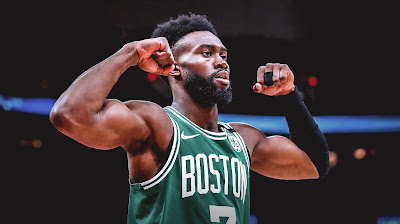 While the future looks bright for the Celtics with potential young stars Jaylen Brown and Jayson Tatum in the mix, there is no guarantee they'll remain in the fold.

Brown could become a restricted free agent next summer if the Celtics don't sign the 22-year-old to a rookie extension deal prior to the Oct. 21 deadline, or risk losing him come the offseason.

According to Sean Deveny of Heavy.com, the Celtics are reportedly prepared to take that chance on Brown, who is set to make $6.5 million this year.


"According to a league source, "the chance is pretty slim" that Brown signs a long-term deal with the team in the coming month. Around the league, the expectation is that Brown and the Celtics won't come to a deal."

When it comes to predicting whether Danny Ainge grants a max extension to Jaylen Brown, most analysts present comparisons to Ben Simmons, Jamal Murrary and Caris LeVert, who all came from the same 2016 NBA Draft class. Simmons and Murray were offered five-year, $170 million max deals from their respective teams, while LeVert received a three-year, $52 million extension.

Glancing at the stats of these aforementioned players, it would seem that a projected contract offer for Brown would be similar to that of LeVert, which would roughly be $17 million per year. That would put Brown's future salary $5 million per-year more than Marcus Smart's $12.1 million a year deal (signed four year, $52 million contract last summer) beginning next season.


History tells us that Ainge does not favor extending rookie contracts and prefers to takes the path of making a qualifying offer and waiting to see what the free agent market dictates, as Deveney pointed out. Such was the case with Avery Bradley, Jared Sullinger, Kelly Olynyk, even Marcus Smart and most recently Terry Rozier. Ainge did make an exception with former All-Star point guard, Rajon Rondo, in 2009, which was prior to the Brad Stevens era. Ainge went right down to the wire before extending Rondo's rookie deal.

But a quick look at Rondo's 2009 playoff numbers tells us why Ainge took this route. In 14 postseason games, Rondo posted 16.9 points, 9.7 rebounds, 9.8 assists and 2.5 steals during that Celtics playoff run. Those are some astounding numbers and Ainge knew what he had in the future four-time All-Star, but that might not be the case when it comes to where he thinks Brown's ceiling is.

Though Brown has emerged as a versatile wing and a consistent two-way player, his third-year playoff numbers of 13.9 points, 5.8 rebounds, 1.1 assists and 0.7 steals per game, are nowhere close to Rondo's stats. Plus, there's also Tatum's contract year to consider that comes into play in 2020.

The Celtics have a little more than three weeks to decide the course on Brown's next NBA contract. I would be absolutely amazed if Ainge went with any kind of extension instead of his usual play it safe route -- not grant an extension prior to the deadline and render a qualifying offer at the right time to see what Brown's season looks like before seeing what type of offers roll in before taking further action.

But if Brown has a strong 2019-20 campaign, especially with what's expected to be an increased role now that Kyrie Irving, Al Horford, Marcus Morris and Rozier are gone. If he gets max-offers from around the league, it will be that much harder for the Celtics to match and retain his talents next summer in what's considered to be a fairly weak free agent class.