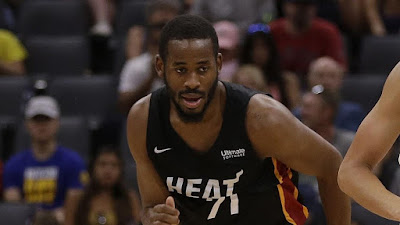 The Celtics have reportedly signed forward Yante Maten to an Exhibit 10 contract, as the start of training camp is quickly approaching.

According to Adam Himmelsbach of the Boston Globe, Maten will compete for the Celtics final roster spot during camp and preseason. The 6-foot-8 forward, who's listed at 240 pounds, played for the Miami Heat on a two-way deal as a rookie last season.

Maten spent all but two games with the NBA's G-League Sioux Falls Skyforce, where he averaged 23.5 points and 9.6 rebounds, to earn himself All-Rookie first team honors.


According to a league source, the Celtics are signing forward Yante Maten to an Exhibit 10 deal.
Maten was a Heat two-way player last season and averaged 23.5 points and 9.6 rebounds for the Sioux Falls Skyforce.
— Adam Himmelsbach (@AdamHimmelsbach) September 17, 2019


The undrafted power forward played four seasons at the University of Georgia and was SEC Player of the Year as a senior during the 2017-18 campaign, averaging 19.3 points per-game.


Check out highlights below of Maten scoring 42 points last season for the Skyforce: