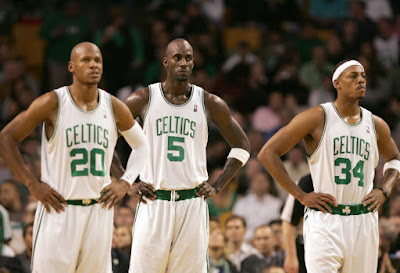 As the 2019-20 NBA season is still on hold due to the COVID-19 pandemic, it seemed like a great moment to take a trip down memory lane with former Celtics coach Doc Rivers.

Rivers, who joined Boston sports writers Bob Ryan and Jeff Goodman on their podcast that was released on Thursday, spoke about the last seven years coaching the Los Angeles Clippers and of course his nine seasons with the Celtics.

While Rivers misses the intensity of the Boston fans, some of who he runs into from time to time out in L.A., who thank him for the championship banner in 2008, while others blame Ray Allen for taking his talents to South Beach, thus what many thought was the beginning of the end when it came to chasing that critical second NBA title.

Despite Kevin Garnett, Rajon Rondo and others that still despise Allen's decision back in 2012 -- just months following a Game 7 loss to the Miami Heat in the Eastern Conference Finals, Rivers is a believer that time heals all wounds.

When it comes to the much publicized rift between Allen, Paul Pierce, Garnett and Rondo, Rivers has gone on record to state that its long overdue for a reunion to happen and make peace.


"This one I take on myself," Rivers said on a possible Big-3 reunion. "I failed with the Paul jersey retirement. I really thought that Ray should have come to that and I tried to get him to. He wanted to, he was going to and he just didn't. We've got to get this one done. I think it would be magical next year when they retire Kevin's [Garnett] jersey.

"I think it would be absolutely magical to get him to come out. He would be shocked of the ovation he got. Listen, he left and I was mad at him, too, for leaving and leaving to our archenemy."

Allen was golfing with George Lopez the day Pierce's No.34 was retired, he wasn't present in the NBC Sports Boston's documentary of the 2007-08 Celtics, nor was nowhere to be found when many from that championship roster appeared on Garnett's Area-21 back in 2017.

Still, Rivers apparently hasn't put himself in his former players' shoes all these years later, despite him wanting to play peacemaker in all of this.


"I still don't know from a player's [perspective], maybe I should ask, said Rivers. "'Were they mad that he went to Miami or were they mad he joined LeBron?' Because I never thought about that part of it. It's probably all of the above."

Allen has been pretty consistent when it comes to the multiple reasons for leaving, but the main one he points to the most was not feeling wanted. Rivers benched him during the 2011-12 season, especially after battling injuries, plus the Celtics signing Jason Terry and trading for Courtney Lee -- who both played his position -- during the 2012 offseason. The rest you could probably find in Allen's tell-all autobiography that he released back in 2018.

Whether you agree with Allen or not, Rivers made one thing abundantly clear when it comes to the former Celtics sharpshooter and the quest to win multiple titles that ultimately was not meant to be.


"At the end of the day, the one thing I know about Celtics fans and our players...they all know we don't have a ring without Ray Allen, so the other part you just have to forget and move on."