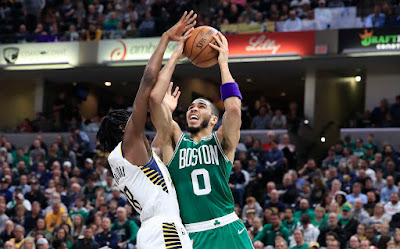 The Celtics haven't played a game since March 10th, which is exactly the last time Jayson Tatum picked up and shot a basketball.

Boston held off the Pacers in a 114-110 road win, as the NBA suspended its season indefinitely less than 24 hours later when Rudy Gobert tested positive for COVID-19.


"I haven't been able to touch a basketball since our last game at Indiana," Tatum revealed on ESPN’s The Jump Monday afternoon.

Tatum finished with 30 points, 6 rebounds and 4 steals in that Celtics victory over Indiana just about a month ago. The All-Star forward says he doesn't have a basketball at home or even own a hoop to shoot around during this current hiatus.


"I thought about it, but the weather up here isn't great," Tatum said on why he hasn't made the purchase of an outdoor basketball hoop. "Five out of six days it's raining and it's still pretty cold up here."

The 22-year-old, who made his first All-Star team this season, was in the middle of a breakout year averaging 23.6 points, 7.1 rebounds and 2.9 assists, while shooting 39.8 percent shooting from beyond the 3-point arc.

With Adam Silver saying no decision will be made on when or if the league will resume play until at least May 1st, Tatum should invest in a hoop in the driveway sooner rather than later, especially since many of his co-workers and associates around the NBA need some time to knock off that lay-off rust at some point.