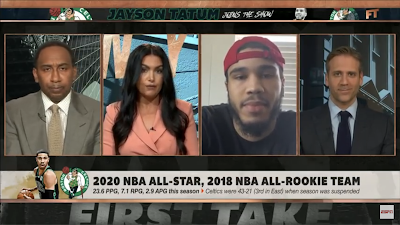 With the NBA season still on hiatus with no real timetable on if and when it will resume due to the COVID-19 pandemic, All-Star Jayson Tatum has been keeping busy during the past few weeks.

While Tatum has been pretty active on all media platforms and voicing messages of positivity regarding social distancing, the Celtics forward made an appearance on ESPN's First Take Monday to discuss the possibilities of playing games again this season.


"From all of the guys I've talked to and all of the conversations that I've heard, everybody wants to play. I think that's the consensus throughout the league. We obviously want to play but under the right circumstances. We gotta just put our trust in the league and the union and understand they'll make the right decision. Obviously, I don't think it's a perfect scenario, that playing without fans would be fun. Nobody has really ever experienced that. I'm not sure that I would be in favor of playing without fans, but I don't think that putting anybody's health or life at risk is more important."

League commissioner Adam Silver said there is no way any decision will be made before May 1 at the earliest -- when it comes to the NBA season, which has been suspended since March 11, resuming play again.


"Essentially what I've told my folks over the last week is we should just accept that at least for the month of April, we won't be in a position to make any decisions," Silver said in an interview with TNT's Ernie Johnson on the NBA's Twitter page. "I don't think that necessarily means that, on May 1, we will be [in that position], but at least I know that just to settle everyone down a little bit.

"It doesn't mean that, internally, both the league and discussions with our players and the teams we aren't looking at many different scenarios for restarting the season, but I think it honestly is just too early, given what's happened right now, to even be able to project or predict where we will be in a few weeks."


As for Tatum, who says he's never gone more than two to three weeks without shooting a basketball, has been trying to stay in shape by ways of a stationary bike, jumping rope and lifting weights. He's also passing the time by seeing the bigger picture and setting up a meal donation program through his Jayson Tatum foundation call "Share a Meal." Tatum and Washington Wizards' guard Bradley Beal have partnered with Feeding America and Lineage Logistics by pledging to donate $500,000 to Boston and St. Louis area food banks.

Tatum made the announcement and plan for him and Beal to each match $250,000 in food donations via an instagram post.


"This campaign will help some of the hardest hit communities in Boston and in Brad and my hometown of St. Louis, receive meals," Tatum wrote.


You can watch Tatum's First Take interview in its entirety by clicking the video below: