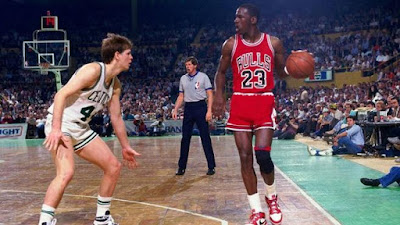 It's hard to imagine Danny Ainge costing his team a playoff series, but if you watched ESPN's "The Last Dance" documentary on Sunday night, that was nearly the case after Michael Jordan lost to the then Celtics guard during a golf outing.

Ainge played a round of golf with Jordan before the Celtics hosted the Bulls in Game 2 of the first round of the 1986 playoffs.

Jordan, coming off a 49-point performance in Game 1, topped that by scoring an NBA postseason record of 63 points, forcing Game 2 into double-overtime before the Celtics barely won 135-131 and eventually swept the Bulls in three games.


"I took a few bucks off of Michael that day, and we're talking trash to each other," Ainge said in part 2 of the documentary. "That might have been a mistake."


Ainge not only beat Jordan, but the up and coming Bulls star had a message following his loss to the Celtics guard, according to author Mark Vancil, who was also present during the golf outing.


"We get done, we get in the car, we drop Danny off first," Vancil said. "And Michael says, 'Hey, tell your boy D.J. [Celtics guard Dennis Johnson] I got something for him tomorrow.' "

Though Boston would win Game 2, Jordan's out of this world performance got Celtics legend Larry Bird to describe the Bulls All-Star as "God disguised as Michael Jordan."

The rest is history, as the Celtics would go on to win the 1986 NBA title and became arguably one of the best teams of all-time. But it was a small glimpse for the basketball world to witness what Jordan's legacy would later become as the most ultimate competitor ever.

For Ainge and the 67-win Celtics, they could have seen a first-round playoff exit and possibly the beginning of the end when it came to the original "Big-3" era in Boston during the 1980's.