Danny Ainge calls out Jayson Tatum for not having a hoop 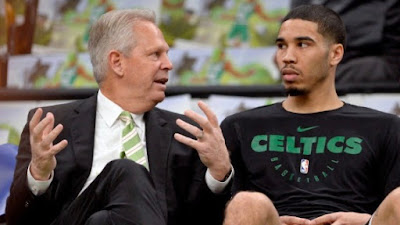 Jayson Tatum continues to get flack on social media since admitting he hasn't touched a basketball in over a month, especially since the Celtics All-Star doesn't even own a hoop.

Tatum also declined to participate in the NBA HORSE Challenge due to the lack of a basketball hoop and now Danny Ainge has joined in on the fun when it comes to the Celtics forward.

During a media conference call on Wednesday, Ainge was asked if recent videos from his Twitter account of him shooting around in his backyard was a massage towards any Celtics player in particular.

"That's mostly directed towards Jayson," Ainge said. "Just to let him know that I had a hoop right there. He can come use it any time he wants. It's all his. I can even loan him Lil' Weezy Dog to play defense for him on his ball handling drills."

All teasing aside, Ainge does hope Tatum is able to either purchase a hoop or borrow his and get some shots up in case the NBA season resumes, even if games are played in empty arenas.


"I've gone to college games and high school gyms and there's like 40 or 50 people in the building, and, you know, it's still a good game," Ainge said. "I've been involved in practices where there are zero fans in the room, and it is intense and it is a battle. Matter of fact, there's many times where I said, like, 'I wish you guys would play as hard against our opponents as you play against one another.’ So I think that it's not ideal, but I think it could work."

Ainge is hopeful that the 2019-20 campaign, which has been on hiatus since March 11 due to the COVID-19 pandemic, will not be cancelled.


"Adam Silver has some tough decisions. I'm holding out hope we're still going to play basketball this year. But that's just me being a fan," said the Celtics president of basketball operations.