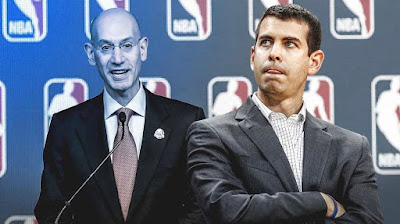 NBA commissioner Adam Silver has assembled a committee in an attempt to salvage the current season -- that has been on hiatus since March 11, due to the COVID-19 pandemic.

According to ESPN's Adrian Wojnarowski, Celtics coach Brad Stevens has been named a member of the committee that consists of owners, general managers and coaches, as part of an "advisory panel on return-to-play planning" for the league commissioner.

Per Wojnarowski, Stevens could be a great asset to Silver in efforts needed towards restarting the NBA season.


"For instance, when member Brad Stevens creates a detailed timetable for restarting training camps, it becomes an idea to be shared, dissected and discussed," Wojnarowski wrote. "There are no shortages of ideas in the NBA community; solutions are a different matter."

While the NBA has come up with many different plans on possibly resuming the season, Woj explains how putting those plans into motion is where issues arrive. For now, the NBA is looking at possible venues like the MGM Grand in Vegas and Disney World in Orlando.

Silver is determined to have a champion this season, even if that means the start to the 2020-21 campaign were to be delayed until late December. The NBA wanted to reopen practice facilities on May 1, but push back from teams forced the league to send out a memo stating that the earliest training facilities could reopen was May 8 and even that is not a firm date.

With social distancing measures in states like Florida and Georgia recently becoming less strict, the NBA says they'll make other arrangements to players who live in states that have a stay-at-home order still in place if training facilities were to reopen with several protocols ready to be in place.

In the meantime, while the NBA continues to consider a wide range of options to restart the season with no fans in attendance, Brad Stevens could be one of the reasons there's basketball again and soon.