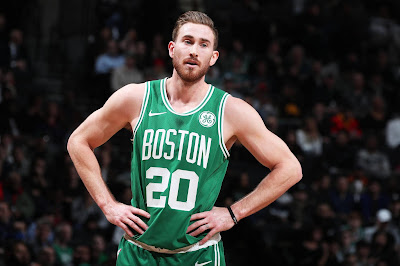 It's been just over a month since the NBA suspended its season due to Rudy Gobert testing positive for COVID-19.

While according to league commissioner Adam Silver, no decision will be made on if and when games will resume until at least May 1st, Gordon Hayward shared his thoughts on the season being on hiatus due to the pandemic -- which has him and family worried.

The Celtics forward and his wife, Robyn, are currently expecting their fourth child -- the couples first boy. It's been a tough four weeks with Robyn being at high-risk when it comes to the coronavirus and especially once they were first told to self-quarantine.


"We were definitely a little nervous about the whole thing," Gordon Hayward said on a conference call. "Definitely didn't want to let her — I mean anybody, but specifically her — get the virus because of the baby and we didn't know what could exactly happen with that. So we were just very pre-cautious with everything and I didn't go anywhere or isolate myself or anything besides just being at the house. But I did — our doctor said, 'Not as many hugs, not as many snuggles,' until we can figure out if I'm positive or negative. So that’s kind of what we did until we got back the results."

Though Marcus Smart, who has since recovered -- was the only player on the Celtics roster to test positive for COVID-19,  Hayward is well aware of the stress this outbreak has caused and the uncertainty of what's to come.

In the meantime, Hayward continues to keep in shape with his physical workouts that include the Peleton and lifting weights.


"The mental and emotional part is certainly going to be something we're all going to have to work through when we get back," Hayward said. "You just get in this mode and this mindset when you're in the middle of the season and then to just kind of not have that for however long of a period this is going to be, it's going to be an adjustment."

Hayward shares the same sentiment with teammate Jayson Tatum, who has said that players want to resume the season, "under the right circumstances." But not just when it comes to playing in front of fans or not, but also giving teams ample time before jumping right back into action without at least 2-3 weeks of preparation.

You can listen to Hayward's conference call in its entirety below: