Kevin Garnett reacts to Hall-of-Fame selection, playing on the Celtics with Paul Pierce 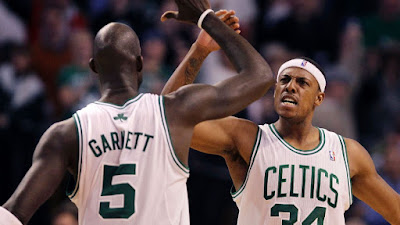 Kevin Garnett will officially be heading into the Naismith Memorial Basketball Hall-of-Fame, as part of the class of 2020.

It was formally announced Saturday morning, that Garnett, the late Kobe Bryant, Tim Duncan and six others who have greatly impacted the sport of basketball, would be enshrined later this year.


A 21-year NBA veteran and 15x NBA All-Star, he was widely regarded for his passion and intensity on the court. He is ranked 4th in all-time minutes played (50,418). We congratulate NBA Champion Kevin Garnett. #20HoopClass pic.twitter.com/oplbzNdDNR
— Basketball HOF (@Hoophall) April 4, 2020


After a 21-years in the NBA, Garnett reacted to the news when he spoke with ESPN's Rece Davis and former Celtics teammate Paul Pierce.

Garnett recalls why he had such a selfless mindset that began in high school and carried throughout his professional career.


"I felt like to have a brand and to be able to call yourself the best, you had to work like it, you had to practice like it. If I was asking players to dive on the floor and be able to do things that normally they wouldn't necessarily do, they had to see it. So I took my craft very seriously. One of the things I like to always say I was, better than anything (else), that I was a great teammate and that was huge for me."

A 15-time All-Star, Garnett won league MVP in 2004, made 12 NBA All-Defensive Teams (nine first team), before winning NBA Defensive Player of the Year honors in 2008 -- the same year he won his first and only NBA championship with the Celtics.

Garnett also reflected on his six years in Boston, as a major reason for his Hall-of-Fame induction.


"Playing with Paul (Pierce), playing with Ray (Allen), coming to Boston was a huge, huge, huge, huge, huge, huge challenge in my life," Garnett said. "It was probably one of the biggest decisions I made in my career, and I'm glad I made it. We should have got together a couple years earlier, right? We'd probably be sitting on about two or three, more rings, but it's all good, man."

Pierce, who played with Garnett in Boston and Brooklyn, got a chance to express what made his former teammate so special on the basketball court.


"I mean, everybody knows his intensity and this is something I can attest to that this did not start in the NBA," Pierce said. "I had a chance to play with him on the high school level, we were juniors in high school and I've never seen someone just so passionate for the game. Every second he stepped on the court it meant something, he went as hard as he could.

"He never cheated the game," Pierce continued. "You know, you see some talents in the game with great potential. But that's one thing you can say about Kevin Garnett is he never, ever cheated one second in practice, in the game. He gave everything he could every single second. And you got to respect that. There's so many lost talents that we see never reach their potential like he did every single night."

Pierce will be eligible for induction into the Hall-of-Fame next year, but he made it clear that he feels more than privileged to have shared time with Garnett as teammates and how proud he is of his friend for all that he's accomplished.


"I’m just happy I had the honor to play with this guy, win a championship with him,” Pierce said of Garnett. “We knew each other in high school, we won a big tournament in high school and to see it come full circle to the NBA and then now he's being enshrined in the Hall of Fame. This is unbelievable — just to be able to say I blessed the same court with him."

Garnett and the other 2020 Hall-of-Fame honorees are set to be enshrined on August 29 in Springfield, MA.