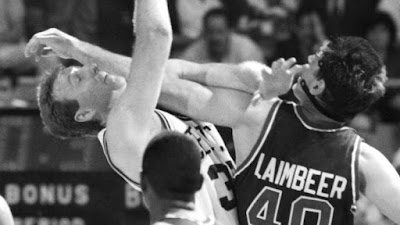 It is no contest when it comes to the most-despised Celtics opponent of all time being Bill Laimbeer of the Detroit Pistons and no runner-ups are even close.

Laimbeer wouldn't just annoy and antagonize, he would whip opposing players into an absolute frenzy. His take-down of Larry Bird in Game 3 of the 1987 Eastern Conference Finals earned him a $5,000 fine, while Bird was fined $2,000 for retaliating. Bird was known for his controlled anger, but he lost it in this confrontation - apparently for good reason.


The game Larry Bird and Bill Laimbeer went at it. Seeing Larry Legend go full berserk is rare. You have to take him to the limit to see that.
FULL VID https://t.co/CgVt6hvPgn pic.twitter.com/kg6BPguWCb
— OLDSKOOLBBALL (@Oldskoolbball1) April 11, 2020


In Game 5 of the same series, the normally-mild mannered Celtics center Robert Parish got so angry at Laimbeer that he golfed him three times in plain view of three officials, none of whom acknowledged that they had witnessed the attack. Nonetheless, although no action was taken against Parish immediately, he was suspended for Game 6 of the series and fined $7,500 for throwing the punches.


The 1986-87 Pistons team also featured Rick Mahorn, Dennis Rodman and Isiah Thomas on its roster, but not one of the trio came close to Laimbeer as an instigator or much-hated opponent. It is truly ironic that no official witnessed the attack by Parish and it can be surmised that they possibly looked the other way. Laimbeer definitely had a notorious reputation in the NBA, whereas Parish did not. Game 5 was close - with the series tied 2-2 and Boston wining by a score of 108-107. Ejecting Parish at the time may have been a deciding factor in the outcome of the series, despite the Celtics wining 4-3 to advance to the Finals. But later examination of the evidence assured his one-game suspension for Parish.

Bird going berserk and Parish losing his cool during the 1987 Eastern Conference Finals tell us all we need to know, as Bill Laimbeer was clearly the most-despised Celtics opponent of all time.