Jayson Tatum finally gets his own hoop 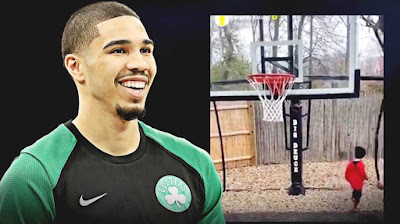 Celtics All-Star Jayson Tatum has revealed that he has finally purchased a basketball hoop.

Tatum can now work on his game during this COVID-19 pandemic, that had the 22-year-old not touch or shoot a basketball since the Celtics last game back on March 10.


Jayson Tatum now has a hoop at his house and it looks like its name is Big Deuce: pic.twitter.com/tqTCCqKGhp
— Chris Grenham (@chrisgrenham) April 28, 2020


Earlier this month, Tatum admitted that he didn't own a hoop and that was the reason he hadn't done any basketball related activities during the NBA season being on hiatus.


"I haven't been able to touch a basketball since our last game at Indiana," Tatum said to Rachel Nichols on ESPN’s The Jump. "I got stuff to work out at home and cardio and weights and stuff, but yeah. I haven't played basketball in a long time."

Celtics president of basketball operations Danny Ainge even offered his hoop to Tatum in case he needed it last week during a media conference call.

Since being in Boston, Tatum had not needed to own a hoop since the Celtics always made the Red Auerbach Center available at any time. But since the coronavirus pandemic, that all has changed .

Tatum may need to take full advantage of his new installed hoop in the driveway, which is appropriately named "Big Deuce" after his son Jayson Jr., who is also commonly known as "Deuce," since the Celtics have no plans to re-open the Auerbach Center anytime soon.

The NBA announced that teams could re-open their practice facilities as early as May 8, while still following social distancing protocols.

Despite the league taking a huge step towards the season possibly resuming, Tatum will have to put up shots at home for the time being.