NBA to withhold 25% of players' paycheck starting on May 15 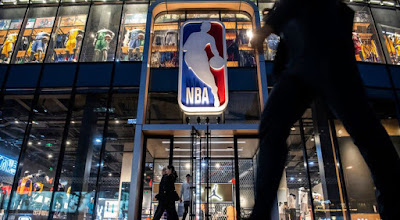 The NBA and the National Basketball Players Association have agreed to a plan to withhold 25-percent of each player's salary, beginning on May 15.

The league and the union made the announcement on Friday afternoon, as the reduction in players' paychecks allows a provision with the collective bargaining agreement to remain enacted with the cancellation of regular-season games.


ESPN Sources: The NBA and NBPA have agreed on the withholding of 25 percent of each player paycheck beginning on May 15. Deal gives gradual reduction in salary should Force Majeure provision be enacted with cancellation of regular season games. May 1 checks will be paid in full.
— Adrian Wojnarowski (@wojespn) April 17, 2020


While players will receive their full paychecks on May 1, teams would keep a percentage of the deduction based on if the rest of the season is canceled. The new agreement plan also means players would have their money returned if the remaining games were to be played.

According to ESPN, the NBA and NBPA will spread out the salary deductions into the first four pay periods, through November and December, of the 2020-21 campaign, if this current season is canceled.

The NBA has no immediate plans to cancel the season, but the withholding of salary would prevent any player from going several pay periods without getting a paycheck, especially if the league did cancel any remaining games.

League sources say, that the union has informed players that the work stoppage will continue until June 15 before anyone will know if games will resume or not.

The CBA states that players lose approximately 1-percent of salary per canceled game, based on the force majeure provision that covers several uncontrollable circumstances, including epidemics and pandemics. Once games begin to get canceled, the force majeure automatically goes into affect under the language of the current CBA.

League Commissioner Adam Silver held a press conference on Friday and while he remains hopeful that the NBA season will resume, there's still no timeline when players can return to the court. But Silver did make it clear that he will prioritize data, as he believes there are still too many unknowns to resume play.

While the season has been suspended since March 11, the league wants to see a number of thresholds met, including a drop of those infected by COVID-19, large-scale testing and a road towards a vaccine before any decisions can be made.


Adam Silver, on what he is looking at when considering NBA return:
-- New infections to come down
-- Availability of testing on large scale
-- Path for vaccine
-- Anti-virals
-- What CDC is "telling us"
-- State rules
— Ira Winderman (@IraHeatBeat) April 17, 2020


Sliver, who's led the NBA since 2014, says that the league has remained in contact with the federal government, as well as the Centers for Disease Control and Prevention. While they continue to weigh their options on finishing out the current season, delaying the start of next season is also a possibility.