Bradley Beal on Paul Pierce: 'The biggest trash talker, probably the most disrespectful player I'd ever seen' 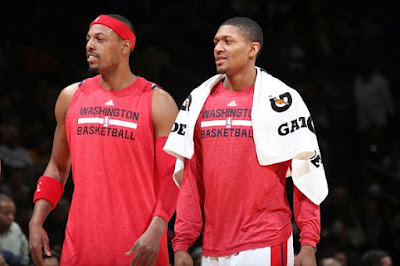 After 19-years in the NBA, Paul Pierce wasn't exactly everyone's favorite player around the league. While the Celtics legend was cocky, he became one of the most clutch scorers of all-time to back up his well known trash talking.

Bradley Beal, who was not a fan of Pierce before they became teammates with the Washington Wizards prior to the 2014-15 season, detailed what he thought of the future Hall-of-Fame forward.


"I thought he was an ass, the biggest trash talker, probably the most disrespectful player I'd ever seen," Beal said on The Lowe Post Podcast. "But when I was his teammate, he was the most fun, lovable guy you can ever imagine."

After 15-years in Boston and a championship, Pierce was traded along with Kevin Garnett to the Brooklyn Nets in the summer of 2013 before signing as a free agent with the Wizards a year later.

Pierce averaged 12 points, 4 rebounds and 2 assists, while shooting 44.7 percent from the floor (39 percent from 3) and 78 percent from the free throw line in 73 games with the Wizards. In his lone season in Washington, he also helped his team advance to the second round of the playoffs, hitting another one of his classic game winning shots to take a 2-1 lead over the Atlanta Hawks, before falling to them in six games.

Though many of Pierce's opponents considered him to be a jerk at times, those who ever played with the 10-time All-Star will vouch that he's always been a great teammate. Just ask Garnett, who is heading to the Hall-of-Fame, when it comes to giving credit to Pierce for changing the trajectory of his career.


"Playing with Paul (Pierce), playing with Ray (Allen), coming to Boston was a huge, huge, huge, huge, huge, huge challenge in my life," Garnett said on ESPN, recently. "It was probably one of the biggest decisions I made in my career, and I'm glad I made it. We should have got together a couple years earlier, right? We'd probably be sitting on about two or three, more rings, but it's all good, man."

Obviously, Pierce was a player you loved to go to battle with on the court. His attitude and passion for the game of basketball was the reason for his many accomplishments and of course being a beloved teammate.