Danny Ainge on when Kevin Garnett first arrived in Boston: 'He emphasized that it was all about the team' 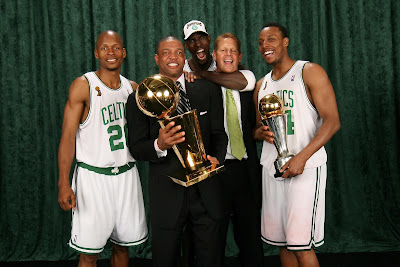 It was nearly 13-years ago that Kevin Garnett was traded to the Celtics from the Minnesota Timberwolves.

Garnett, the former 2004 league MVP had only one goal -- to win his first NBA championship and he accomplished it alongside Ray Allen and long-time friend Paul Pierce, just 11 months after his arrival in Boston.

While it was officially announced this past Saturday on ESPN -- that Garnett is Hall-of-Fame bound, along with eight other honorees as part of the class of 2020, it was that faithful July day KG essentially guaranteed his "Big Ticket" to Springfield, MA.


"He wouldn't do individual photo shoots," Danny Ainge recalled of Garnett when he first arrived in the summer of 2007. "He wouldn't do it without Paul (Pierce), or Ray Allen. Most of the time he even wanted to include more guys than that. He emphasized that it was all about the team." [Boston Herald]

Garnett didn't just help Boston raise their 17th championship banner in 2008, which was the franchise's first in 22 years, he changed the culture around the Celtics with his infamous unselfishness that affected everyone around him daily once he walked into a room.


"He changed it a lot. Not only did he just change it with his energy and approach, but just with his greatness," said the Celtics president of basketball operations. "He changed Paul (Pierce), and he changed Ray (Allen), and he changed (Rajon) Rondo and Perk (Kendrick Perkins). Because he was such a gifted player and an intense person, his mere presence changed everybody because it gave everybody hope.

"It was his consistent effort and energy, in a day-in, day-out, in practice and games, and the second part of that would be his willingness to do whatever he needed to do," said Ainge. "He was a pass-first guy that scored a lot of points, but he preferred passing. If he needed to shoot more he would, if that's what the team needed to win, but he was willing to accept a role to help the team win. Everybody knew that — that he was always about winning, never had an individual agenda." [Boston Herald]

It's not a coincidence that the Celtics plan to retire Garnett's number after his Hall-of-Fame induction, a clear 'thank you' from the organization that still feels KG's impact to this day -- almost seven years later since being traded.

Despite Garnett only playing in Boston for six seasons, his number hanging in the TD Garden rafters will serve as a constant reminder to current and future players of his greatness that will forever be etched in Celtics' history.