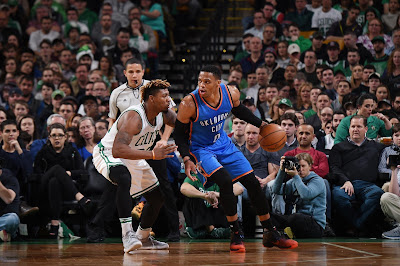 The Celtics were looking to extend their streak to a season-high five wins as they hosted Oklahoma City at the TD Garden on Friday night. But it was Russell Westbrook who turned it on when it mattered most, the fourth quarter, as he scored 15 points to secure a 117-112 Thunder win.

Westbrook finished with 45 points (5-of-7 from behind the arc), 11 assists and 11 rebounds for his 14th triple-double of the season. It was also his third straight 40-point game as the Thunder are now 17-12 on the year.

Enes Kanter scored 20 points and 6 rebounds in 23 points off the bench while rookie Domantas Sabonis finished with a career-high 20 points on 4-of-6 from the 3 to give Oklahoma City their second straight victory.

Westbrook was held scoreless until the 8-minute mark in the second quarter, and with 45 seconds left in the period, he hit a jumper to tie the game at 54 a piece and followed it with a go ahead layup to give the Thunder their first lead of the night. The guard ended the half with 16 points, 9 assists and 4 rebounds.

Boston trailed 58-54 at halftime and the Thunder push their lead into double-digits in the third quarter before the Celtics tied it up 96-96 with seven minutes left in the fourth.

With chants of "M-V-P!" from the Garden faithful, Isaiah Thomas converted a three-point play while sinking his free-throw and the C's regained their first lead since late in the second period.

The Celtics would lead 104-100 when the Westbrook show began with just under three-minutes left to play in the final frame, the OKC guard had been scoreless the entire quarter.

Jermai Grant's dunk cut the Thunder's deficit to two and Westbrook scored the next eight points including a go-ahead three-point play, and the Celtics never recovered.

In the final 1:15 Westbrook hit two long 3-ball daggers to ice the victory and snap Boston's four-game winning streak in the process


"We've got really good defenders on him and he made great plays," Celtics coach Brad Stevens said afterwards. "I don't know what to say other than 'Hats off to him' for plays he made."

Oklahoma City has swept the Celtics three of the last four seasons, Boston is 1-7 against the Thunder since Brad Stevens took over in 2013.

Boston is now 17-13 on the season and will travel to New York to take on the Knicks (16-13) on Sunday for their first Christmas Day matchup since 2012.

The Celtics record of 17-13 is the same after 30 games a season ago. With Friday's night loss, Boston currently has a home record of 6-6.