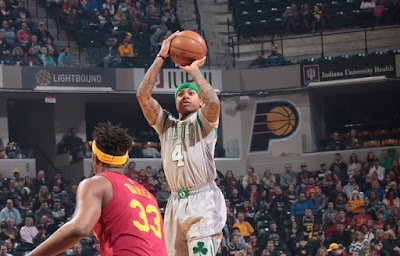 It was another great fourth quarter in the books for Isaiah Thomas as he scored 14 points in the final frame, leading the Celtics to a 109-102 win over the Indiana Pacers at the Bankers Life Fieldhouse on Thursday night.

Amir Johnson (6 rebounds) and Kelly Olynyk (5 rebounds) each finished with 11 points a piece.

Jeff Teague led all scorers with 31 points to go along with 8 assists and 5 rebounds for the Pacers, who were playing without Monta Ellis (groin). Paul George contributed with 19 points (5-of-16 shooting) and 8 rebounds while C.J. Miles also added 19 points off the bench. Thaddeus Young finished with a double-double of 15 points and 12 rebounds for Indiana's second straight loss

Boston led 51-40 at halftime after they climbed out of a nine-point deficit, outscoring the Pacers 29-9 and limiting them to 3-of-21 shooting (14.3-percent) in the second quarter. The Celtics would continue to pour it on in the third period and take a 77-67 advantage into the fourth.

Indiana would cut into Boston's lead 87-83 with 5:26 left on a C.J. Miles 3-pointer, but Al Horford (8 points, 11 rebounds) hit a layup and Thomas made two free-throws plus another layup to push it back up to 93-83 and that was as close as the Pacers would come the rest of the way.


"Fourth quarters ain't for everybody," Thomas said afterwards. "That's when it really matters. I just embraced the opportunity. I love when the game is close, I want to be that type of guy. I just do what I've always done, I guess.

"The last game of the road trip is always the biggest one," Thomas added. "We've had a successful road trip and we got some confidence from it."

Isaiah Thomas has led the Celtics in scoring 22 of the team's 29 games. The C's are now 4-0 since his return from a groin injury six days ago. Boston is currently five-games over .500 for the first time this season.