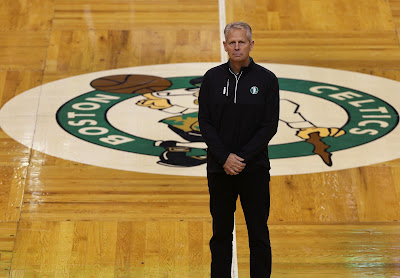 With the 2016-17 NBA season now over a quarter of the way complete for the Boston Celtics [13-12], the C’s now stand just one game above .500 in what has been a disappointing start to a once promising year.

Boston has battled injuries to each of its top players, including three of five starters within the first two-plus months of the season, but even without the injury issues the Celtics have looked stale and average to say the least. A team that many analysts were picking as a trendy Eastern Conference Finalist has had a fifth place start and seems to have fallen even further away from the defending champion Cleveland Cavaliers and Atlantic Division's front-running Toronto Raptors.

While the season is far from over and Boston has plenty of time to recover and make a run at being a top four seed in a weak Eastern Conference, the Celtics may want to take this time to enjoy a dose of reality.

Even if Boston plays .700 ball for the remainder of the season, they would only finish with 53 wins.

Think about that for a second.

Again, while it is possible for the Celtics to find their mojo they had for much of last season, Boston would need to be among the top handful of teams in the NBA for the remainder of the season to achieve (what was once considered) a realistic and even probable goal of 50-plus wins.

With that said, is it time for Danny Ainge to take a seat at the poker table and take a risk to inject some life into a stagnant Celtics squad?

My answer: an emphatic YES!

Ainge has waited for two seasons to have the opportunity they now stare square in the face, a chance to trade for a legitimate superstar. Boston is finally in the ideal position to pull the trigger on the deal they have been yearning to make. They know that all of their assets are maxed out on value and nothing more can be squeezed from the core that Boston currently employs.

What we are currently seeing from the C's on a nightly basis. The Celtics lack star power and this season has been highlighted by it.

Here’s a few reasons why there is no better time than now:


Celtics players as assets are maxed out

No offense to Avery Bradley, Isaiah Thomas, Jae Crowder and the rest of the Celtics faithful but the current core isn’t going to get much better than what we have seen. Players like Marcus Smart and Jaylen Brown have additional potential to deliver on but for the most part, Boston is a team filled with players who are in the 'what you see is what you get' category.

Paul Pierce and Kevin Garnett are the gifts that keep giving. Boston hold rights to the Nets picks in each of the next two drafts and that looks like a very good thing. With Brooklyn among the NBA’s worst teams yet again this season, it seems the Celtics will have another shot at the top pick of the 2017 NBA Draft…or maybe that can be someone else’s gamble.

The 2017 crop of talent (while intriguing) isn’t deep and has more question marks than certainties. Josh Jackson from Kansas seems like the best bet and even he has some major work to do before he can lead an NBA franchise.

LET THIS PROBLEM BE SOMEONE ELSE'S.

It may seem like I’m rooting against the C's, but I’m just being realistic. This team (on its best day) won't win an NBA title as currently instituted and holding out for a playoff win or two doesn’t make sense. The Boston Celtics play for banners and waiting on this crop to be good enough to do so is like waiting for the sun to explode… it may happen but we could be here a while.

Ultimately, with a less than stellar chance to win the East, why wait?

What more can we ask of a team that has overachieved every step of the way over the last two years and is in dire need of a new face that can elevate them to the next level. While many cringe at the thought of DeMarcus Cousins, he is free for the taking (according to many NBA insiders) but you would have to be willing to risk it all. The picks, the young potential, and bombing out of the Eastern Conference playoffs in round one against the Atlanta Hawks again.