Isaiah Thomas will sit out against the Raptors on Friday 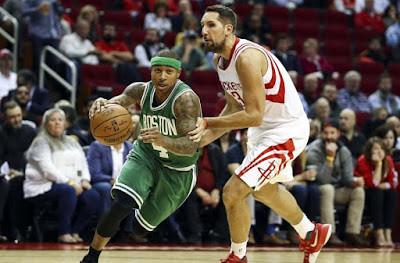 The Boston Celtics looked like a well-oiled machine as they finished with 29 team assists on 43 made field goals, shooting 51.2-percent in a 117-87 win over the Orlando Magic without Isaiah Thomas in the lineup on Wednesday night.

The All-Star point guard received a platelet-rich plasma injection earlier in the day for a groin strain he sustained in the first half of Monday night's loss to the Rockets and will miss his second straight game on Friday against the Toronto Raptors.

On Thursday afternoon, Thomas ruled himself out stating that it wasn't easy for him electing to sit out for a second game especially since prior to Wednesday the veteran had played 103-consecutive regular season games for the Celtics

"I trust in those guys. They played a hell of a game [Wednesday]. They'll be ready [Friday]," Thomas told reporters at the team's practice facility. "I won't be playing [Friday]. But they'll be ready.

"I'm going to do whatever I can to get back out there on the court. It's eating me alive to not be able to participate, not to be able to play, but I gotta be smart about this because I don't want this to linger on for the rest of the season."

"I gotta do what's best for my body," he said. [ESPNBoston]

According to Celtics president of basketball operations Danny Ainge, Thomas had the injection into his thigh muscle.

"I think that it's just day-to-day. I mean, he is a warrior. He loves to play," Ainge said on a Boston sports radio station Thursday morning. "He'll be back faster than most players would be back after an injury." [CBSBoston.com]

Celtics have an off day on Saturday before a two-game road trip that begins on Sunday against the Oklahoma City Thunder then off to San Antonio to face the Spurs on national TV next Wednesday, so Thomas could get extended rest depending how he feels in the upcoming days.

Thomas in 21-games is averaging 26 points per-game for second best in scoring in the Eastern Conference behind only DeMar DeRozan, who is putting up 28 points per-game.

Boston (13-9) will host Toronto (15-7) at the TD Garden in the first meeting of the season for the Atlantic Division rivals on Friday beginning at 7:30 PM