Jae Crowder on 3-pointer vs Cavs: 'It didn't feel bad at all' 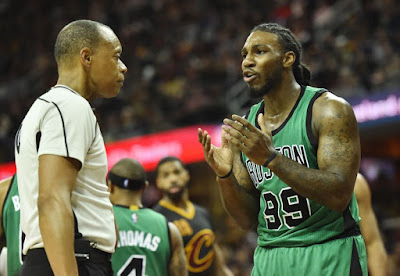 Although it wasn't the outcome he expected, Jae Crowder isn't showing any remorse over taking the potential go-ahead 3-pointer towards the end of the Celtics' 124-118 loss against the Cavaliers.

After nearly erasing a 20-point deficit and grabbing a lead with eight seconds left in the game, Crowder missed a 3-pointer that could have won the game for the Celtics -- one that he says he felt confident was going to go in.

Crowder says the play was designed for him and that his teammate Isaiah Thomas encouraged him to take the shot.

Thomas, who was double-teamed by two Cavaliers, dribbled towards the corner -- creating space for Crowder's attempt just right of the top of the key. Celtics coach Brad Stevens was seen clapping his hands in approval after Crowder's missed 3-pointer and told reporters after the game he had no problem with Crowder taking the shot in that situation.

The Celtics (19-14) are now tied with the Hornets for third place in the eastern conference and will look to improve on their record on Friday night when they host the Heat at TD Garden.