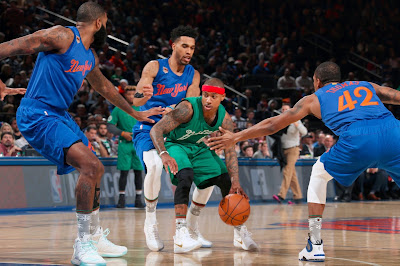 After blowing a 13-point fourth-quarter lead, the Knicks nearly left a sack of coal in the Celtics' stocking before Marcus Smart hit the biggest 3-pointer of the game and Avery Bradley put the defensive clamps on New York's best scorer.

With the game tied at 112, Smart drained one from deep to give the C's a three-point lead with 47.8 seconds left.

Carmelo Anthony, who had two chances to tie the game, missed a 3-point attempt on the first chance and turned the ball over to Bradley on the second before he could even attempt a shot.

Anthony got the ball back after Joakim Noah's offensive rebound but when Anthony tried dribbling away from Bradley to create space for a shot, Bradley deflected the ball and gained possession for the Celtics. Jae Crowder was intentionally fouled, he split a pair of free-throws that made it a two-possession game with 17.9 seconds left.

The Knicks pulled to within three points (117-114) but the Celtics made their shots at the charity stripe to seal a 119-114 win at Madison Square Garden.

Isaiah Thomas' 27 points led six Celtics in double figures. Crowder scored 16 points, Kelly Olynyk (16 points) did the same on 7-of-9 shots, including 2-of-3 from deep to lead the bench while Marcus Smart (7 assists) and Al Horford (7 rebounds, 5 assists) each finished with 15 points and Bradley chipped in 11 points, 6 rebounds and three steals.

Anthony scored a game-high 29 points for the Knicks. Kristaps Porzingis (22 points, 12 rebounds) notched a double-double and Derrick Rose finished with 25 points and 5 rebounds.

The Celtics managed to stay ahead of the Knicks throughout most of the last three quarters while shooting at nearly a 50 percent clip (48.4). Led by Olynyk and Smart, the C's bench combined for 41 points but Gerald Green made the most of his 11:40.

Green provided energy after coming in for rookie Jaylen Brown, he finished with 8 points and four rebounds.

Anthony and Porzingis took turns chipping away their double-digit deficit before Knicks guard and former Celtic Courtney Lee's 3-pointer topped off a 13-2 Knicks run, pulling them to a two-point deficit (82-80) with 2:29 left.

But the Celtics managed to hold onto the win and never allowed the Knicks to pull ahead after the knotted things up at 112.

The Celtics will head home for a rematch against the Grizzlies on Tuesday before hitting the road again to take on the Cavaliers in Cleveland.

The Celtics defense forced 17 turnovers while impressively only committing six turnovers. Isaiah Thomas is now averaging a season-high 27 points per game. He's passed Kevin Durant (26.2) and is now tied with Damian Lillard for sixth in the league in points per-game and has averaged 33.3 points in his last four outings.