Craig Sager: Ode to an Icon 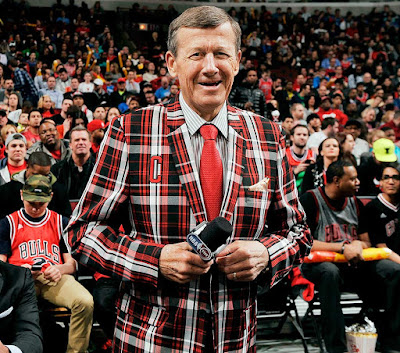 As I sit here and wonder, what is it that makes someone special? I believe it's the simplest things that you do that go a long way for others, without you even noticing you do them. Craig Sager fits the profile of someone who, without a doubt was special.

I'd watch Craig do his things on the sidelines, in the locker rooms, whether on TBS or TNT a few times a week. Back when you could catch NBA games on Turner Sports more than just on Thursdays during the regular season.

No, I never had the honor or the pleasure of meeting Craig Sager in person, but we do go way back.

See I was that kid that laughed, smiled and would say to myself, 'man he's got the coolest job ever.' I looked forward to NBA All-Star weekend, the Saturday afternoon rookie challenge, the festivities later in the evening such as the dunk and 3-point contest. Then of course the All-Star game on Sunday night, and all the funny skits, interviews and specials in between that Craig was a part of.

Craig Sager became the signature and somehow the bow that wrapped around the weekend almost every one I could remember long before TNT had the exclusive rights to broadcast Sunday's All-Star game more than a decade ago. There was never a dull moment with Sages during that weekend, way before social media made things go viral. I remember talking about it at school with my friends the next chance I got.

For years I'd watch countless NBA games and without a thought Craig Sager was just that guy to me who was synonymous with every Turner Sports broadcast. If you were a basketball fan, you knew who Sager was.

With every question asked to players and coaches, you got the sense Craig had a friendship with each and every one of them once the cameras were off. None of that was more evident then what we saw this past year.

The man I grew up idolizing, was also a hero to others as well and when he was diagnosed with a rare form of Leukemia more than two-years ago, I thought myself, 'if anyone could pull through, it would be Sager.'

The love and support shown around the globe was truly amazing to view from a far while we got to enjoy the return of Craig to where he belonged, the NBA sidelines holding that microphone with a grin and his whacky attire.

2016 was the year Sager not only got to return to TNT from the many surgeries and treatments, but got to cover his first NBA Finals game after 30 years, was also honored at the ESPY's and his Chicago Cubs finally broke the curse to win the World Series for the first time in over 100 years.

But unfortunately life is unfair sometimes and the little kid in me is still asking 'why?'

I know Craig should be here, still taking it all in, but that was never in his control to begin with.

Despite the cancer diagnosis, the doctors, the chemotherapy and countless other procedures, Sager lived his life the only way he knew how, getting back to work as a broadcaster as quickly as he could, spending time with his family, never complaining, always laughing like he had the best kept secret to happiness.

We should all be so lucky to figure out what Craig probably already knew long before fighting his biggest battle, that when it comes to life:

"Time is something that can not be bought, it can not be wagered with God and it is not an endless supply... Time is simply how you live your life." [C. Sager's ESPY acceptance speech]

I'm reminded of these powerful words that have stayed with me since I first heard them that summer night back in June. There is no doubt in my mind that Craig Sager at age 65, truly lived his life.

From us witnessing just a quarter of his life on TV, a man who I don't think ever got angry even when things didn't go his way, he was too busy enjoying everything life has to offer, especially when he was told the inevitable would occur.

I'm not going to pretend I knew what Sager's last moments were like, but I'm pretty sure he continuously reminded his wife, kids and family that he loved them very much. I would like to think he had very few, if any, regrets and was happy with all he had accomplished.

If there's anything we should take away from his story; is that we should live life and not waste the little time we have on this earth talking about it.

We should tell the people we care about that we love them and we should never take any day for granted.

During this time of year where friends and family come together; I simply want to thank you Craig Sager for not only being an inspiration as a broadcaster and a cool guy I grew up watching all these years, but for reminding me how short life is. It doesn't mean you can't live it your way every single day even when you're told otherwise.

No, we never got a chance to meet, but it was an honor just to watch you be you, Craig... May you rest in paradise...