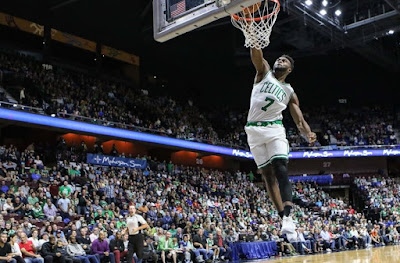 While Jaylen Brown isn't sure if he wants to participate in this year's NBA Dunk Contest, two of his teammates expressed their interest in wanting to see the rookie at All-Star weekend in New Orleans.

After hearing a conversation between veteran Gerald Green and Brown about this year's dunk contest, Isaiah Thomas petition to social media his desire to see Brown in the 2017 Dunk Contest.

Brown says that's when Thomas' interest in seeing him in the dunk contest began.


"That's when Isaiah got kinda excited about it, I guess," Brown said Thursday at Celtics shootaround in Cleveland. "I don't know, man. I haven't really thought about it. [Thomas is] putting a little pit pressure on me. ... [Green] wants me to do it, too. He said he's got some ideas for me. We got some time. We'll think about it, I guess." [ESPN Boston]

Green, who won the contest in 2007 as a member of the Celtics, believes it would be a great way for Brown to showcase his athletic ability.


"It will be good to show the world his athleticism," Green said. "A guy like that, man, anything for him to get exposed is pretty good. And it's his rookie year so I think your rookie year, you get to kinda go out there and have fun, experience it, and then late on in your years you can just focus on things you need to focus on to get better as a player.

"I told him if he enters it then I'll give him some pointers, give him stuff that I think he can do. The dunk contest is different from when I was in it. It's all about creativity and style and how you perform it or whatever. We'll see how it goes if he wants to get in it or now." [ESPN Boston]

Green completed the 'cupcake dunk' in 2008 -- where he blew out a candle on a cupcake that was on the back of the rim before completing the dunk -- when he attempted to defend his dunk championship as a member of the Timberwolves.

Brown was asked if he would be able to duplicate Green's 2008 dunk.


"Can I do that? I bet I could do that," Brown said. "[The dunk contest is] all about preparation. If I put the game plan together, I probably could do it. At this point, I don't know yet." [ESPN Boston]

Green, who is the oldest player on the Celtics' roster, can still jump as high as the rest of his teammates, Brown says. He considers Green his biggest competition on the Celtics when it comes to dunking.