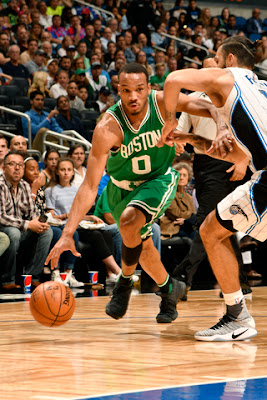 With a balanced scoring attack and a big second half, the Celtics destroyed the Magic on their own floor in a 117-87 blowout.

The Celtics' offense grabbed control of the game after halftime by outscoring their opponent 68-37 and finished the game shooting 51.2 percent from the floor.

Without Isaiah Thomas, who suffered a strained groin in Monday night's game against the Rockets, the Celtics managed to make up for his 26-point average with ease as seven Celtics scored in double-digits.

Avery Bradley finished with a game-high 23 points, Jae Crowder (17 points, 10 rebounds) notched a double-double and Amir Johnson added 11 points. Marcus Smart, who got the start in place of Thomas, scored 13 points and Al Horford poured in 10 points to go with a team-high 8 assists.

For the second straight game, the Celtics bench scored over 30 points. Led by Terry Rozier's career-high 16 points and Jaylen Brown's 13, the Celtics reserves combined for 43 points.

Although the Celtics' defense only forced 12 Magic turnovers, their offense was no match for the C's. Their backcourt duo of D.J. Augustin (15) and Evan Fournier (14) combined for 29 points, while Nikola Vucevic's (12 points, 10 rebounds) finished with a double-double off the bench. But as a team they only shot 37 percent from the floor.

Orlando grabbed an eight-point lead in the first half -- their biggest of the night -- but failed to respond to the Celtics' 36 points in the third quarter. The C's attacked the paint and finished with 58 points in the post.

The Celtics finished their three-game road trip with a 2-1 record before hosting the division-leading Raptors on Friday at TD Garden.

The C's out-rebounded the Magic, 49-37, including 11 offensive boards that they converted into 19 second-chance points. Rebounding and scoring in the paint made the difference as the Celtics were able to pull ahead of the Magic and never looked back.