5-Keys for Celtics to beat Spurs without Isaiah Thomas 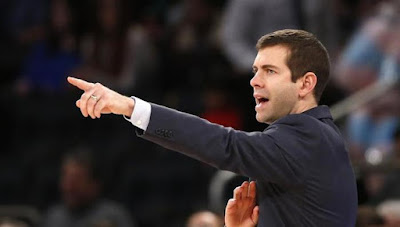 After back-to-back losses to the Raptors and Thunder, respectively, the Celtics schedule doesn't get any easier as the C's are in San Antonio (19-5) to take on the second-best team in the league without their best player.

Without Isaiah Thomas (groin), the Celtics will face a tall task of pulling off an upset on national TV -- ESPN -- and prove how good they are without their All-Star guard.

Winners of 14 of their last 16 games, the Spurs haven't lost a game at home since Nov. 29 -- surprising loss, not only because it was against the Magic but because the Spurs suffered only on lass at home last season (40-1) and are already 6-4 this year at the AT&T Center.

San Antonio actually plays better on the road (13-1) than at home this year but this certainly doesn't negate the fact that the Celtics will have their hands full on Wednesday.

Although the Celtics aren't the only ones playing without a member of their starting unit -- Spurs forward LaMarcus Aldridge (rest) will sit out against the Celtics -- San Antonio still has plenty of firepower behind the rest of their starting lineup and have guys who can produce off the bench.

However, if the Celtics are to pull off what would be their biggest win of the season, here are give things that would go a long way toward helping that happen.

1. Jae Crowder comes through with his season-best effort

Coming off an ankle injury that forced him to miss eight straight games, it only took Crowder two games to find his offensive rhythm. The scrappy small forward followed up a 15-point, 6-of-11 performance in Brooklyn on Nov. 23 by scoring 18 points on 7-of-12 attempts against the Spurs at home.

He's quietly shooting the ball very well this month. In six games, Crowder is shooting 49.2 percent from the floor and averaging 13.3 points. With Thomas (groin) sidelined for his fourth straight game, Crowder is due to have a breakout night. After scoring the Celtics' first nine points against the Thunder on Sunday, he was on pace for a big offensive performance but foul trouble deterred his momentum as he fouled out at the 3:19 mark of the fourth quarter, finishing with 18 points on 7-of-9 shots, including 3-of-4 from deep in 27 minutes.

If the Celtics are going to defeat the Spurs, they're going to need scoring from guys other than Al Horford and Avery Bradley. In Thomas' absence, Bradley and Horford are averaging a combined 36 points per game. They're going to need Crowder's scoring against the Spurs, as well as his terrific defense on the wing in order to give Brad Stevens his first NBA career win against San Antonio.

2. Limit San Antonio to less than 40 points in the paint

With Aldridge (rest) sitting out on the first night of a back-to-back, the Celtics will still have plenty of other players to worry about but not having Aldridge in the mix certainly helps, a little.

Celtics are 3-3 in their last six outings -- in all three of their wins, the C's held their opponent to 38 points or less in the paint. In a narrow 109-103 win, the Spurs only scored 30 points down low in their last meeting against the Celtics, look for coach Gregg Popovich to expose the Celtics' lack of interior defense. Boston is coming off of a game where they allowed a whopping 66 points in the post against the Thunder and the Spurs have plenty of players like Kawhi Leonard and David Lee -- who finished 4-of-7 in the paint in their last meeting -- who can finish strong down low.

The Celtics are fourth in the league in fewest free-throws attempted (20.3) per game. After attempting only eight shots from the charity stripe against the Thunder on Sunday, Brad Stevens has to find a way to get his guys to the line.

Guess which team the Celtics only attempted nine free-throws against earlier this season -- the Spurs.

That's not going to cut it in San Antonio. Whether it means finding Horford in the post, setting up backdoor plays for Bradley and Crowder or forcing his guards to put the ball on the floor more often, Stevens has to find a way to draw fouls against the Spurs. Free-throws will be very important in this matchup as well as inside scoring.

Although the Spurs commit only 12.8 turnovers per game, the Celtics forced 17 Spurs turnovers in their last meeting. This helped the Celtics gain some momentum on the offense -- giving them more possessions in the fourth quarter that the C's failed to capitalize on.

In what was one of their better efficient offensive games of the season, the Celtics only committed 10 turnovers -- which gave them a chance to pull close in the final minutes before coming up short. Boston will need as many opportunities as they can get in San Antonio. It starts on the defensive side and ends on how strong their offense can finish on the other end of the floor.

Brad Stevens is going to need 30 or more points out of his bench. With Marcus Smart starting in place of Thomas, the Celtics bench had proven that they can still score without their sixth man. In their last two outings, the Celtics reserves combined for 24 points against the Thunder and 32 against the Raptors, respectively.

Coming off an impressive fourth quarter in Oklahoma City where he scored 10 points in four minutes, rookie Jaylen Brown will be very important for this bench group. Brow, who finished with 19 points, 5 rebounds in Cleveland against the Cavaliers on Nov. 3, proved that he isn't afraid to perform in front of national TV's bright lights. If he can carry over his offensive momentum from Oklahoma City to San Antonio, it will put the Celtics in great position for a win.

It won't be easy for the league's third overall pick but with Kelly Olynyk and Terry Rozier shooting 25.4 and 29.1 percent, respectively in their last two outings, this is the time for Brown to step up. With an excellent performance from the rookie, the Celtics bench should be able to have themselves an offensively productive night.