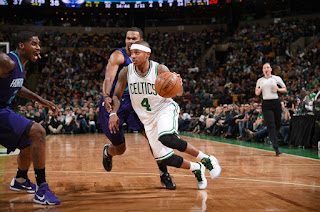 Back at full strength, the Celtics put together a strong second half performance and cruised to a 96-88 win over the Hornets at TD Garden.

With All-Star guard Isaiah Thomas returning after missing four straight games, the Celtics' leading scorer reached his season scoring average while pushing his team to outscore their opponent by 18 points in the final two quarters.

Thomas added 5 assists to go with his game-high 26 points and Al Horford's production chipped in on both ends of the floor -- he finished with 18 points, 8 rebounds, 5 assists and 5 blocks while Avery Bradley and Jae Crowder each finished with 12 points.

After falling behind to a double-digit deficit in the third quarter, the Celtics rallied behind a 15-0 run to pull ahead by two points (64-62) and that certainly set the tone in the second half. Charlotte played catch up throughout the final frame before momentarily regained a two-point lead midway through.

However, Hornets guard Marco Belinelli committed a Flagrant-1 foul on Thomas -- which triggered a 13-0 Celtics run that was topped off by a 3-pointer by Bradley and gave the C's an 11-point advantage (90-79).


"We got stops and got running," Thomas said. "The one thing we did in the fourth quarter is we just spaced the floor and made plays for each other. Guys hit big shots."

The Celtics also picked up their intensity on the defensive end, forcing the Hornets to settle for contested jump shots. Charlotte 32.7 percent field goal percentage is a season-low for any opponent that's faced Boston this season.

In the final four minutes, the Hornets could only outscore their opponent 9-6 before surrendering to their fourth consecutive loss.

Crowder, who contributed in both of the Celtics' big scoring runs in the second half, spoke about how much this game meant to him and his teammates.


"We needed the win," Crowder said. "No doubt. We felt this was the one we had to have. We talked about it this morning, and tried to take care of business.

"We have to have that moving forward," said Crowder of his team's determination. "We can't just build off what we did last year. We have to bring that with us and continue to get better in other situations and other scenarios. But that's one thing we have to get back to -- being a gritty team, and especially in games like this. You have to be able to dig deep and win."

The Celtics (14-12) will embark on another three-game road trip that starts Sunday night against the Heat and ends in Indiana against the Pacers.

The Celtics did a tremendous job of attacking the paint -- where they finished with 38 points. The valiant effort also led to trips to the free-throw line -- where the C's netted 19-of-26. For a team that's averaging 20 free-throw attempts a night, the Celtics got to the line often, which disrupted Charlotte's momentum, especially in the second half.