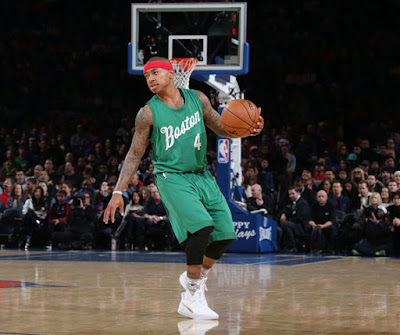 Celtics guard Isaiah Thomas was named the NBA's Eastern Conference player of the week on Monday.

The All-Star guard had an extraordinary week, leading the Celtics to a 3-1 record against teams like the Grizzlies, Pacers, Thunder and Knicks.

Headlined by a 44-point, career-high performance against the Grizzlies, Thomas averaged 33.3 points and 7.3 assists throughout the week. Despite dropping a 117-112 loss against the Thunder, Thomas led with 10 assists, matching his season-high.

He also led the Celtics in scoring in all four games by scoring no less than 23 points in each outing.

The Celtics (18-13) have now won five out of their last six games, they're third in the Eastern Conference, half a game ahead of the Hornets.

Russell Westbrook, of course, was awarded the NBA's Western Conference player of the week honors. He averaged a league-high 41 points, 10 assists and 9.8 rebounds while leading the Thunder (19-12) to a 3-1 record on the week.