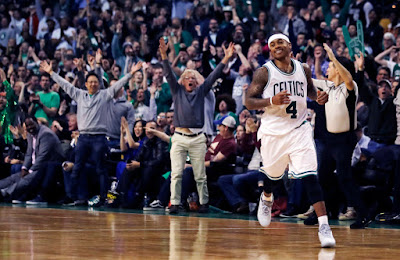 Expect to see a familiar face back in the Celtics starting lineup against the Hornets at TD Garden on Friday night.

After sitting out four consecutive games with a strained groin, Isaiah Thomas expects to make a comeback, according to the All-Star point guard.

Thomas addressed the media yesterday at a charity event in Cambridge held to assist families effected by the Dec. 3 house fire.


"I'll be suited and booted tomorrow," Thomas said at the event. "Hopefully I can help my team get a win." [CSNNE.com]

The Celtics (13-12) went 1-3 in Thomas' four-game absence and are currently tied with Bulls for fifth place in the Eastern Conference.


"It's been very tough because I know there are areas in which I can help them," Thomas said. "The fourth quarter is where I kind of do a lot of positive things and help my team in that area. It's been frustrating but at the same time we have to have a short memory and keep going, keep grinding and hopefully we can protect home court tomorrow and get a string of wins with this road trip we got coming up." [CSNNE.com]

After Friday night's tilt against the Hornets, the C's will head out on the road for another three-game road trip that includes stops in Miami to face the Heat, Memphis to take on the Grizzlies and ends in Indiana for a game against the Pacers.

Timing couldn't be any better for the Celtics, facing a Hornets (14-12) team that is playing without their starting point guard -- Kemba Walker. Charlotte is tied with the Knicks for third place in the east and looking to distance themselves from a crowded conference.

Thomas is the Celtics' leading scorer, averaging 26 points a night -- good enough for seventh in the NBA in points per game.