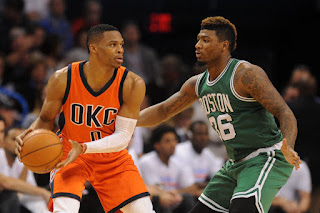 In a game where the Celtics were ahead of their opponent through the first three quarters, the Thunder stuck around and never gave the impression that they wouldn't pull ahead in the final frame.

Russell Westbrook, who entered the game with seven consecutive triple-doubles, had his streak snapped against the Celtics but scored eight of Oklahoma City's last 10 points en route to a 99-96 Thunder win.

Oklahoma City guard Victor Oladipo left the game after he jumped on an up-fake by Celtics forward Jonas Jerebko which led to him falling hard on the ground and was slow to get up before he headed to the locker room and never returned. Without their second-best scorer, the Thunder managed to erase a double-digit deficit before Westbrook closed the game out.

With the game tied at 94, Al Horford committed a costly turnover that ended with an easy layup for Westbrook on the other end of the floor. In the very next play, Avery Bradley missed a layup that would have tied things up but he grabbed his own rebound along with Westbrook. Both players we whistled for a jump-ball -- which ended in another Thunder fast-break possession for an easy layup for Oklahoma City's Jerami Grant, making it a two possession-game.

Marcus Smart putback Horford's missed shot on the following play before Westbrook split a pair of free-throws with five seconds left. The Celtics -- with no timeouts left -- had one last chance to tie the game when Smart grabbed a rebound, pushed the ball up the floor and took a good looking 3-pointer that came up short.

Westbrook scored a game-high 37 points to go with his 12 rebounds and 6 assists. Steven Adams added 16 points, 8 rebounds and Enes Kanter chipped in 14 points.

Horford led the Celtics with 19 points, 6 assists while Bradley and Jae Crowder each finished with 18 points. And Smart, who started in place of Isaiah Thomas (groin) for the third straight game, filled the stat sheet with 11 points, 9 assists and 6 rebounds.

Crowder, who was in foul trouble throughout the night, was certainly missed in the final two minutes of the game after he fouled out at the 3:20 mark -- which took away another scorer for the C's and one of their best defenders. Crowder finished 7-of-9 from the floor, including 3-of-4 from deep.

The Celtics grabbed a 13-point lead (66-53) -- their biggest lead of the night -- inside the 4-minute mark of the third quarter before Oklahoma City carried a 18-5 run into the fourth and knotted the game at 71. Celtics rookie Jaylen Brown stepped up offensively when they really needed him to -- he scored 10 points in four minutes, which helped the C's regain an eight-point lead with seven minutes left.

But when Westbrook went into takeover mode, the Celtics struggled in trying to keep their lead and the Thunder were able to pull away with a win at home.

The Thunder made a living in the paint on Sunday -- where they scored 66 points and 14 second chance points on 15 offensive rebounds. Their biggest lead a four-point advantage late in the fourth quarter when the Celtics committed critical turnovers and defensive lapses on Westbrook and his teammates.