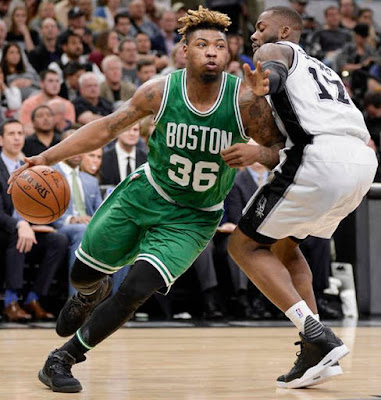 Brad Stevens has never beaten the Spurs in his professional coaching career, he entered Wednesday night with a 0-7 record against the Spurs and left San Antonio with another loss against veteran coach Gregg Popovich.

Kawhi Leonard and Tony Parker didn't disappoint the home crowd at the AT&T Center as the Spurs beat the Celtics for an eighth straight time in Stevens' tenure, 108-101.

Parker finished with 16 points [10 in the final frame], 7 assists, while Kawhi Leonard led all scorers with 26 points and 6 assists for San Antonio who are now 20-5 on the season.

The Spurs, who were playing without LaMarcus Aldridge, shot 55-percent from the field. Pau Gasol recorded a double-double of 17 points, 13 rebounds and the savvy vet; Manu Ginobili chipped in 12 points and 4 assists off the bench.

Avery Bradley led the way with 25 points, 10 rebounds and 6 assists for Boston, who were losers of two straight coming in to San Antonio. Jae Crowder chipped in 15 points and grabbed 6 rebounds while Al Horford added 13 points, 5 rebounds. Terry Rozier led the bench with 12 points in 25 minutes.

The Celtics started off the night with an early lead, but a couple of big runs by both teams in the first half, combined with a one point Boston lead, led to a 14-4 run by the Spurs and they were up 56-47 at halftime.

Boston would go on an 18-4 run in the final minute of the third quarter to get within one point (74-73), but that was the closest the Celtics got to regaining their lead as they played catch-up the entire fourth period and suffered their third-straight loss, fourth of their last five. Celtics are now 13-12 on the season.

San Antonio finished with 33 assists on 44 made baskets for the night.

Celtics are now 0-7 seven against teams with a .600 winning percentage or higher this season and 3-7 against Western Conference teams. Overall, the C's only have two wins against opponents with over a .500 record.

Next up, Boston will host the Charlotte Hornets [13-12] at the TD Garden on Friday night.

Isaiah Thomas missed his fourth straight game with a groin injury, where the Celtics are now 1-3 in his absence. The All-Star guard could make his return on Friday. Marcus Smart made his ninth start of the season, fourth consecutive as the team's point guard. Throughout that span, the C's are 4-5 when Smart is in the starting lineup.