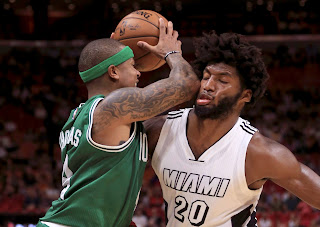 The NBA has rescinded Isaiah Thomas' flagrant-2 from Sunday night's game in Miami against the Heat, according to Boston Herald's Steve Bullpett.

After elbowing Heat forward Justise Winslow with 3:02 left, Thomas was handed a flagrant-2 and was ejected from the game.

Now, league officials have stepped in and downgraded the call from a flagrant-2 foul to a flagrant-1.

Per NBA spokesperson, Isaiah Thomas' flagrant 2 foul has been downgraded to a flagrant 1 by the league.
— Steve Bulpett (@SteveBHoop) December 20, 2016

Luckily, the ejection didn't cost the Celtics the game but Thomas was certainly on pace to possibly have a 30-point night. In less than seven minutes, Thomas scored 10 of his 23 points in the fourth quarter before his night was through.

However, the Celtics prevailed in a 105-95 win over the Heat as Miami failed to close the gap in the final three minutes of the game.