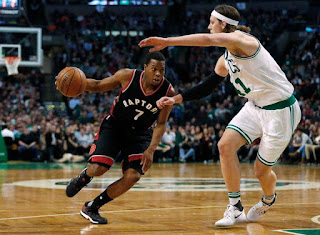 After an impressive first half by the Celtics, the Raptors' dynamic duo of Kyle Lowry and DeMar DeRozan demonstrated why they're one of the best backcourt combinations the league has to offer -- leading their team to a 101-94 win at TD Garden.

With the Celtics down by four points, Lowry drained three free-throws after Al Horford committed a debatable shooting foul with 30 seconds left.

Out of a timeout, Horford completed a three-point play to pull the C's back to within four points (98-94).

After Raptors guard Cory Joseph split a pair of free-throws, Horford launched a 3-pointer in hopes of pulling the Celtics to within two points but fell short.

Horford (7 rebounds, 6 assists) and Avery Bradley (5 rebounds) each scored 19 points. Marcus Smart, who got the start in place of Isaiah Thomas (groin), finished with 12 points and five assists and Terry Rozier added 12 points off the bench.

Toronto outscored the Celtics, 33-18 in the third quarter and capped off a 21-3 run in the fourth to give them an 11-point lead. Lowry scored 21 of his 34 points in the second half while DeRozan finished with 24.

Behind efficient outside shooting, the Celtics led by eight points (50-42) at halftime and extended advantage to 14 points halfway through the third quarter -- their biggest lead of the night. However, the Raptors took advantage of five turnovers committed by the C's in the quarter and erased their deficit after going on the biggest run of the night (21-3) and protected their lead in the final minutes of the game.

Celtics couldn't find their offensive rhythm in the third quarter -- they shot 5-of-18 from the field and had a tough time trying to get high percentage shots and easy looks around the basket.


"It was hard for us to break their wall of defense," Brad Stevens said. "They were pushing into us, they were very, very athletic at a number of positions and they ratcheted it up. And it was hard for us to handle that pressure. And when we drove they collapsed and used their athleticism to affect us in the paint. They were very good. Their defense was fantastic in the third quarter."

The Celtics bench certainly did their part in the first half -- where they scored 21 of their 32 points. C's shot 40.5 percent from behind the arc on 17-of-42 attempts. However, the outside touch cooled off in the second half. They went 5-of-14 from outside and a handful of missed 3-pointers toward the end of the game let the game slip away as the Raptors kept their lead intact.

Celtics will head out on a quick two-game road trip that starts on Sunday night against the Thunder and ends on Wednesday in San Antonio against the Spurs.

The Celtics relied on their outside shots to tie things up while taking 42 3-pointers -- tying a franchise record for most 3-pointers attempted at home. The C's set this record last week at TD Garden against the Pistons in a 121-114 loss.