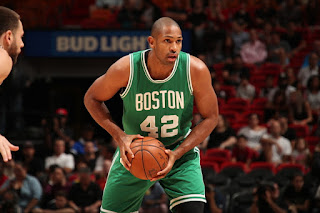 After nearly surrendering a 22-point lead, the Celtics fought through a chippy fourth quarter to pull off a hard fought over the Heat.

On an offensive play, Thomas was whistled for a Flagrant-2 foul for elbowing his defender -- Heat forward Justise Winslow -- in the face while trying to create space deep in the corner which resulted in Thomas being kicked out of the game.

Even though Winslow missed both free-throws stemming from the Flagrant-2, Miami went on to score six straight points, topping off a 9-0 run and pulling to within four points (97-93). But Al Horford kept the Heat at bay by completing a single-handed 5-0 run -- which made it a three-possession game (102-93) with 1:02 left.

Goran Dragic's game-high 31 points led the way for the Heat. Hassan Whiteside put together a double-double (23 points, 17 rebounds) while Josh McRoberts and Winslow each scored 8.

The Celtics rushed out to a 22-point lead in the first half, including 37 points in the opening period -- its season-high for most points scored in the opening quarter. By halftime, C's were shooting at a 56.8 percent clip, including 5-of-10 from behind the arc.

After three quarters, the Heat took a seven-point deficit into the final frame (77-70). Despite committing 19 turnovers throughout that span, the Celtics were outscored by 10 points in the third quarter (29-19), where Whiteside pulled down 13 of his 17 rebounds.

Thomas and Horford took turns scoring for the Celtics while controlling the pace of the game. Miami's run after the Thomas ejection certainly gave them life but Horford's layup and three-point play made the difference down the stretch.

The Celtics will make their second stop of the three-game road trip in Memphis on Tuesday to take on the Grizzlies.

The Celtics defense forced 23 turnovers -- which may have cost Miami the game, along with efficient scoring by the C's -- and finished the night minus five in the rebounding category. Despite shooting 52.2 percent from the floor, the Heat never regained the lead after pulling to within seven points in the fourth quarter. Heat center Whiteside grabbed 17 of his team's 42 rebounds, while the Celtics grabbed 37 boards.