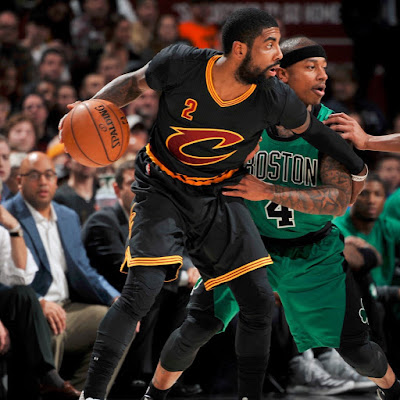 After winning six of their last seven games, the Celtics had all the momentum they needed to pull off an upset in Cleveland.

In dramatic fashion, the Celtics pulled to within one point -- nearly erasing a 20-point deficit as they were one 3-pointer away from pulling ahead of the champion Cavaliers with 8.5 seconds left but ultimately came up short in a 124-118 loss.

After LeBron James split a pair of crucial free-throws to give his team a two-point lead (120-118), Jae Crowder had a good look behind the arc but his 3-pointer came up short at the top of the key. The Celtics were forced to foul Richard Jefferson, who drained both free-throws and sealed the win for the Cavaliers.

Behind Crowder's 3-pointer and a steal by Avery Bradley on the following inbound pass that ended in a layup, the Celtics scored five points in eight seconds -- making it a one-possession game (113-110) for the first time since the first half.

Isaiah Thomas scored 19 of his team-high 31 points in the first half. Bradley scored 23 points, had four steals and Crowder finished with 13 points.

But the Celtics' defense struggled, especially in transition. Love had a quick start with 17 first-half points and so did Irving, who scored 15 and it certainly didn't stop there.

Love turned it up a notch after halftime -- he scored three 3-pointers in the midst of a 10-0 run Cavs run to start the half. Cleveland's 17-point lead was their largest advantage at the time as the Celtics teetered between being blown out and erasing a double-digit deficit.

However, the Cavaliers didn't take their foot off the gas pedal as they got themselves to the free-throw line, finished plays in transition and opened up a 20-point lead (99-79) just before the final frame. They outscored the Celtics 35-24 in the quarter.

But the Celtics had one more run left in them -- a 21-7 run -- one that started with a Tyler Zeller layup at the end of the third quarter and ended with a Zeller layup with 5:47 left, pulling the Celtics to within six points (108-102). Jerebko, who scored five straight points in the middle of that run, remained on the floor after a Cavaliers' timeout alongside Bradley, Zeller, Crowder and Jaylen Brown.

Both teams went back and forth, trading buckets in a three-point game before a Crowder steal on one end of the floor, resulted in a fast-break dunk by Bradley on the other and pulled the C's to within one point with 1:37 left. But that was the closest the C's came to completing their 20-point comeback.

Celtics won't have much time to dwell on their loss to the champs. They will head home for a Friday night matchup against the Heat at TD Garden.

The fact the Cavaliers' Big 3 combined for an astonishing 85 points proves how lethal they can be on offense. However, the Cavaliers committed a lot of turnovers -- 18 -- James committed eight of those but unfortunately the Celtics didn't start capitalizing on those turnovers until the fourth quarter.

Celtics looked very shaky defensively and didn't start locking down the Cavaliers until the second unit set the tone for the starters in the fourth quarter. Huge defensive stops by Bradley and Crowder resulted in easy buckets for the C's as they were able to crawl back and nearly completed the biggest comeback of the season.