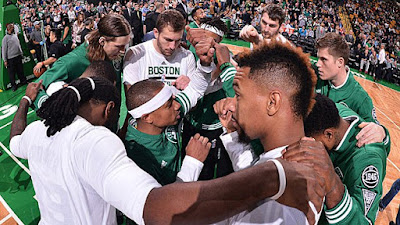 The Boston Celtics have 18 games left in the regular season and currently stand at 38-26 on the year. They have made the leap from a fringe playoff team last year to sitting pretty as the third seed  in the Eastern Conference.  Brad Stevens and his squad have proved a lot this year up to this point. The playoffs seem like a foregone conclusion, but there is an achievement this Celtics team has a chance at in the regular season.  That is the 50 win plateau.

The Celtics would need to be able to crank off a 12-6 record to finish the season to get to the elusive 50 win mark. That’s a .667 winning percentage to close out the final 18 games, compared to the .594 winning percentage they have accumulated over the year. It would be a pretty nice stretch to end the year. The best 18-game stretch the Celtics had all year was from Jan 22- Feb 29 where they were 14-4. So, theoretically they do have it in them to get to 50 wins.

Last year at this point, if you would have told Celtics fans that they would have reached the 40 win mark by the end of the year, you would have been met with a lot of skepticism. On March 9th, 2015, the Celtics were 25-36. Then ended the year 15-6 and got themselves into the dance at 40-42. This year, instead of reaching for mediocrity, the Celtics will look to cement themselves firmly into the upper echelon of the NBA. The 50-win mark is meaningless at the end of the day, but still it's something everyone will be keeping an eye on in the upcoming weeks.

The Celtics have been borderline dominant lately, minus the Cavs game. They are riding a 13 game win streak at home and the way they have been able to impose their pace and intensity on other teams since the beginning of February. It makes one think that 50 wins could be in the bag. However, if you look at the schedule this fictional measuring mark that has been such a topic of conversation of late may be more of a pipe dream.

The Celtics currently are able to benefit from a lull in their schedule. After the Cleveland game on Saturday night, Celtics only play two games in nine days. That is crazy rest. Rest they will definitely need before they go on what is probably the most difficult stretch of games the entire season. 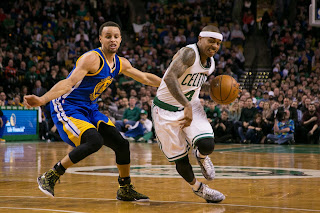 To close out the season the Celtics will play 12 out of 18  games against playoff teams.  Six of those games against some playoff teams  will be away from the TD Garden.  They will play the Pacers, Raptors, Clippers, Blazers, Warriors, and Hawks on the road. That is absolute bananas.  Also, it’s not like the Celtics just get a bunch of cupcakes at home to close the season out either.  You start this tough stretch against the Grizzlies and Rockets at home, then end the season back in Boston with the Hornets and Heat.

So you may be thinking to yourself; how in the hell will the Celtics get to 50 wins?

Even though the Celtics are going up against these playoff caliber teams, their opponents are very guard heavy teams. The Celtics thrive on slowing down the opponents guards. Silver lining I guess is a nice way to put it, but the Celtics will be busy trying to slow down arguably the three best guards in the league over this stretch in Steph Curry, James Harden, and Russell Westbrook.

The Celtics need a few other things to go their way. First off, Kelly Olynyk needs to return healthy for this to be a consideration. He by no means will be the Celtics MVP down the stretch but him being able to knock down the long ball and play serviceable defense against bigs is key.

Another huge thing that needs to happen is the continued emergence of Marcus Smart. Over the past month he has looked like a border line future all star about to burst on to the NBA stage. He'll have his stage  to do so, with the aforementioned guards he will need to shut down. Smart is absolutely key to the Celtics having a strong finish. If somehow he could average 12 points, 5 rebounds, 4 assists and 2 steals plus just be a monster on the defensive end, the Celtics' chance of 50 wins increases dramatically. 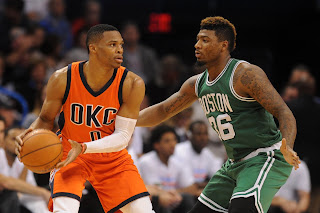 The final reason why the Celtics still have a chance at 50 wins is the little man, Isaiah Thomas. This is his time to take over. Last year, we all remember him single handedly owning the NBA in March and April. He always seems to turn it on at the end of the year. Recently, he has been playing at another worldly level. Over the past three games, Thomas is averaging 29.7 points per game and hasn't turned the ball over once. How other worldly is that? The only other player to ever accomplish this was Michael Jordan.

All this being said my prediction at the beginning of the season still stands. The Celtics will reach 50 wins and end the season at 51-31. How they get there will be interesting to watch, but I firmly believe that this team is a top team in the NBA, and that feat will go far in making the league take notice.

[Listen to my prediction here]