Durant on Boston: 'I like the city a lot' 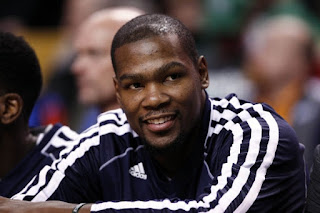 Although the Celtics aren't considered a favorite to land the impending All-Star free agent, Kevin Durant had nothing but good things to say about the storied franchise.

The Celtics are expected to make a strong push to sign Durant this upcoming summer. Durant spoke to the media at this morning's shoot around about how excited he is to face the Celtics and how he feels about the city of Boston.

"I'm looking forward to it," Durant said about facing the Celtics. "Some of the best fans in the world. They support their team."

Durant went on to tell the Boston Globe:


"I like the city a lot," Durant said. "It's cold, but they love sports here. It's a family atmosphere I feel when I walk around the city, so yeah, I like it a lot."

It's been a while since Durant last played a game at TD Garden. His injuries have prevented him from facing the Celtics throughout the past few seasons -- the last time Durant faced the Celtics in Boston was on Nov. 23, 2012.

But Durant admits that despite not facing them, he's had his eye on the Celtics.


"I've been watching this team a lot," he added. "They're scrappy. They play hard. They love their coach. They love their system, and especially in this building, they play with a lot of energy. So it's going to be a tough test.

Durant will get a taste of Celtics basketball at TD Garden on a national stage on Wednesday at 7:00 PM on ESPN.