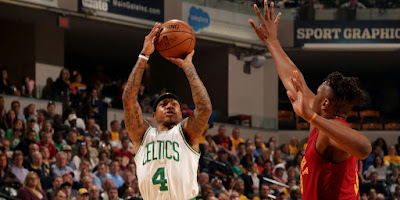 Two months ago the Celtics were able to rally back late in the fourth quarter and beat the Pacers at the TD Garden. On Tuesday night, lightning didn't strike twice for the C's and their 38 percent shooting as they fell to Indiana 103-98 at the Banker's Life Fieldhouse.

Paul George led all scorers with 25 points, while Monta Ellis added 16 points to go along with his 6 assists. Jordan Hill chipped in 15 points for the Pacers who are now 36-31 on the season for the seventh best record in the Eastern Conference.

Isaiah Thomas finished the night with 21 points, 8 assists and 6 rebounds for Boston. Jonas Jerebko scored 17 points to lead the C's bench (32 points), while Jared Sullinger recorded another double-double of 15 points and 11 rebounds. Marcus Smart started in place of the injured Jae Crowder and contributed with 12 points, 4 rebounds and 2 assists in the Celtics second straight loss.

The Pacers led by as many as 10 in the second quarter before Boston cut the deficit on a 6-0 run and a 43-39 halftime score. The third quarter saw seven lead changes without any team opening up any significant gaps.

Evan Turner hit two free-throws to put the Celtics up 77-76 with 8:05 left in the final period, which would be their last lead of the game. The Pacers would go on to put together a 20-9 run in the next six minutes that would prove to be the difference. Despite efforts by Brad Stevens and his different lineup changes, Boston never got any closer than three the rest of the way.

"We had a stretch where we couldn't score in the first half, then I thought we were playing great all the way to the end of the third quarter," said Stevens. "I thought they just dominated us in the paint after that."

The Celtics and Pacers split their season series 2-2 and only three games separate both teams.

"There is a reason they're well above .500 and the third in the east," Pacers coach Frank Vogel said of the Celtics. "We made big plays offensively and scored the ball at crunch time when we needed to against a great defensive team."

Boston is now 39-28 and tied with the Miami Heat with the same record (own tie-breaker). They return home Wednesday as they look to snap a two-game losing streak when they take on the Oklahoma City Thunder.

Tip-off is at 7:00 PM EST and will be nationally televised on ESPN.

Boston attempted 32 three-pointers while hitting only eight of them (25-percent) on the night. Kelly Olynyk, who participated in practice over the weekend for the first time since before the All-Star break, missed his 11th straight game nursing a sore shoulder, could be questionable for Wednesday night.