Isaiah Thomas considers Friday's game against the Raptors a 'must-win' 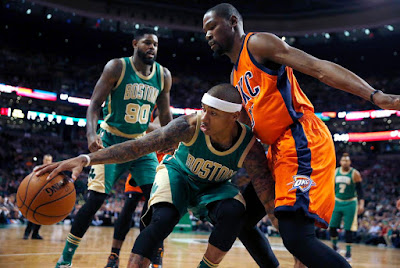 Celtics All-Star Isaiah Thomas expressed his frustration about his team's recent three-game losing streak following their 130-109 loss to the Thunder on Wednesday and considers Friday's game against the Raptors a must-win.

In a game where the Celtics allowed 42 third-quarter points and never held a lead, Thomas was very unhappy with his team's performance.


"They punked us. We played soft as tissue," Thomas stated. "That third quarter, they took advantage of every little thing they could have. With a good team like that, you can't have that happen. So, whoever is playing, whether Jae's out, Kelly's back, they punked us. That was basically what it was. They were the tougher team, no question."

The Celtics are now in a three-way tie for fourth place in the Eastern Conference. Thomas believes his team will make it into the playoffs but with four and a half games separating the eighth seed from the third -- he doesn't think it's going to be easy.


"[Expletive], three in a row, losses that we've had. It was probably our worst loss of the season. We've got to win. The playoff picture, not saying we're not going to make the playoffs, but it's close. Toronto is another test for us. We've got to be mature about the situation and just try to get a win."

Thomas also didn't want to use Jae Crowder's injury as an excuse for their losing streak.


"I wouldn't say that. He's a big part of this team but that's not it," Thomas said. "We just have to find the toughness without him. We've got to get that chip back on our shoulders, not saying we lost it. But tonight, we took a step back."

Thomas added that although Crowder's defense is surely missed, the Celtics have to figure out a way to win in Toronto and it starts with his team's toughness.

Celtics coach Brad Stevens echoed the same sentiment on his team playing without their starting small forward for what could be the next three-four weeks.


"Hey, I think Jae's really, really good but I think we would've needed our whole team to play better tonight," Stevens said. "Obviously, we miss Jae, we love having Jae, we want him to be healthy and back but we have to play well without him. That's the bottom line. There should be no excuses there."

Finally, Thomas talked about Marcus Smart's recent shooting slump and if he had any advice for the young point guard. Smart went 5-for-22 in his last two games, including 1-of-12 from deep.

The division leading Raptors have won five of their last six games. They enter Friday's game two games behind the Cavaliers for first place in the Eastern Conference and hold a 10-1 record against teams in the Atlantic Division.