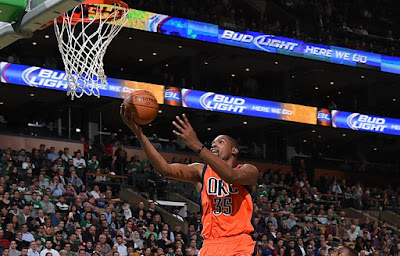 In an attempt to lure the impending free agent, Celtics fans showered Kevin Durant with nothing but affection on Wednesday night at TD Garden.

It started with a loud ovation when he was introduced during the Thunder's player introductions and ended with a number of "Come-to-Boston" chants throughout the night.

Before the game, Durant said all the right things about the Celtics organization and the city of Boston. Durant certainly understands the Celtics history and the city's passion.

After the game, the All-Star forward was asked about what he thought about the chants towards him.


"I didn't even hear that man," Durant said. "I couldn't understand what they were saying. They said that?"

Yes, Durant they did say that and it fell on deaf ears, apparently. What are your thoughts?

Well, it was worth a shot, Celtics fans. Celtics president of basketball operations Danny Ainge, who was in attendance, will have to wait a while before he can have a conversation with Durant.

The final Durant chant of the night was certainly the loudest. Click on the video below to hear for yourself.