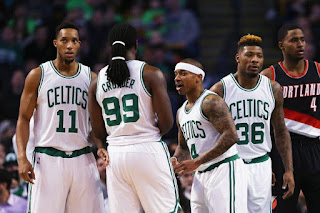 They refuse to lose at home.

After regaining the lead in the second quarter, the Celtics beat the Blazers in a blowout fashion on their way to a 116-93 win for their 12th consecutive victory at TD Garden.

The Blazers, a team that won eight of their last nine games before heading to Boston, couldn't prevent the Celtics fast break scoring and saw their double-digit first quarter lead vanish due to a 18-5 Celtics run. In the end, the Celtics scored 30 fast break points and limited themselves to a season-low five turnovers.


"We flew around about as well as we have all year in the third quarter," Celtics coach Brad Stevens said.

Bradley scored eight of his 17 points in the third quarter. Alongside Thomas, the Celtics back court duo out-shined one of the league's better back court scoring tandem in Lillard and McCollum. Bradley and Thomas combined for 47 points and shot 52 percent on 18-of-34 shooting.

Thomas, who dominated on 11-of-20 shooting, including 3-for-6 from behind the arc, was beating his opponent off the dribble and in transition. If he wasn't converting difficult layups, it was his pull jumpers that were going in.

After the game, Thomas talked about his mindset before going into a game and believes that teams are still taking the Celtics lightly so he uses that as motivation.


"Teams in the NBA they still don't respect us. And we know that," Thomas said. "We go into every game with a chip on our shoulder knowing that we gotta earn the respect. We gotta earn what we get and take what's ours."

The Celtics haven't won 12 straight games at home since 2007. They will look to make it 13 in a row on Friday when the host the Knicks at TD Garden.

After the game's opening nine minutes, while down by 10, the C's outscored the Blazers, 75-39 before heading into the fourth quarter. That's absurd. Not only were the Celtics shooting well from the perimeter but scored more than half of their points in the paint -- where they nearly doubled up on Portland, 60-34.