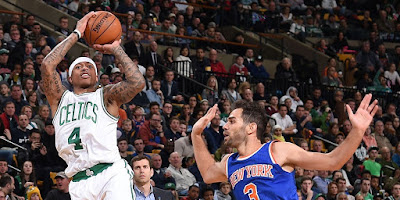 In the final outing of their five-game homestand, the Celtics' win over the Knicks may have been their most impressive win of them all.

On Friday night, Boston didn't just hustle their way to a 13th straight home victory by beating the New York Knicks 105-104, but they also just put the rest of the league on notice as Avery Bradley (9 points) hit the game-winning layup with 17.7 seconds left.

Carmelo Anthony ended his night with 30 points and 7 rebounds. Arron Afflalo added 17 points as Kristaps Porzingis finished with 15 points for the Knicks, who lost their third in a row.

The Celtics were down for most of the first half by as much as 11 points before they cut the deficit and were down, 58-53 by intermission. Boston went on a 15-2 run midway through the third quarter to gain their first lead of the night by forcing turnovers and scoring in transition. But New York wouldn't give up. They re-gained the lead in the fourth and led by as many as eight points.

Boston went on mini-runs getting within a point on several occasions before they went on a 13-4 run in the last four-minutes to close it out on an Bradley lay-up to go up one with 17.7 seconds remaining.

Down 105-104, Carmelo Anthony dribbled the clock down to 3.3 seconds before getting fouled by Crowder. The Celtics, who had a foul to give since they hadn't committed one all quarter, used it at the last moment as they foiled the Knicks' plan to look for a final shot. Once New York inbounded the ball to Anthony again, he missed the potential game winning jumper as time expired.

In four of their last five wins at the TD Garden, the Celtics have come back from double-digit deficits and despite their 38-25 record (third best in the Eastern Conference) with 19 games remaining, they believe they can climb even higher in the standings while still reaching their maximum potential.

"The sky's the limit," said Evan Turner. "At the end of the day, we always give ourselves the opportunity to play the right game and win. I think when it comes down to a [playoff] series and all of us are healthy and everything, I think we'll give a lot a teams a lot or problems."

The Celtics will be put to the test again on Saturday when they battle the Cleveland Cavaliers (43-17) on the road. The last time these two teams met, Boston won on a buzzer-beating corner 3-pointer by Bradley. This will be the final meeting of the season as the series is tied 1-1. Tip-off is a 7:00 PM EST.

Boston outscored New York in fast break points 30-4, and 60-32 in the paint while both teams shot nearly 47-percent from the floor. The Celtics forced 10 turnovers into 15 points on the night. Kelly Olynyk missed his seventh straight game with a sore right shoulder. Jared Sullunger celebrated his 24th birthday on Friday with a stat line of 9 points, 11 rebounds and two huge outlet assists passes to Jae Crowder in 28 minutes of action.