Celtics - Raptors Preview: Jonas Valanciunas will be in action for Toronto 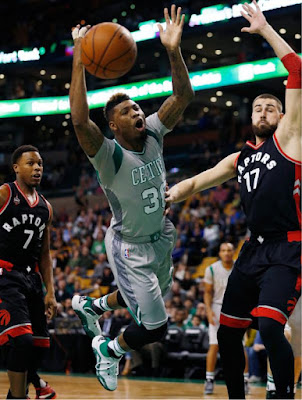 Raptors center Jonas Valanciunas, whose missed Toronto's past four games with a left hand injury, will be back in action on Wednesday night against the Celtics at TD Garden.


The Raptors will look to sweep the season series (3-0) and win their fifth straight when they take on the Celtics on Wednesday at TD Garden.

The Raptors are one of the hottest teams in the Eastern Conference -- they're 9-2 throughout the month of March and are 1.5 games behind the Cavaliers for the top spot in the east. Valanciunas' left hand has kept him out for 21 games this season but is a tough cover whenever he's in the lineup. Valanciunas leads the team in rebounding (9 per game) and is averaging 12.7 points per game this season.

The last time these two teams played each other -- the Raptors dominated. The Celtics never led once and played catch-up the entire night until Toronto finally shut the door on Boston's hopes of a comeback in the fourth quarter.

The Celtics have to slow down Toronto's scoring back court in Kyle Lowry and DeMar DeRozan, and not allow the Raptors to jump so far ahead of them like they did in Toronto, last Friday. The Raptors rarely give up big leads, so when they were able to hop out to a 16-point lead at the end of the first quarter -- they protected that lead for 36 minutes in their last game against the C's.

If so, the Celtics will have a chance to win but it's not going to be easy. The defense has to buckle down against Toronto's explosive scoring back court and protect the glass. Amir Johnson is coming off of great back-to-back rebounding performances -- averaging 9.5 in his last two games but the C's are going to need to see some of that out of Jared Sullinger, who had 3 rebounds against the Magic on Monday. Toronto is also a great 3-point shooting team -- they're ranked fifth in the league in 3-point percentage (36.8).

Raptors (48-21) are one-win shy of setting a franchise-record for most wins in a season. Meanwhile, the Celtics (41-30) are in a three-way tie with the Hawks and Hornets for fourth place in the Eastern Conference. After Wednesday's game, the Celtics will travel out west for a season-high five-game road trip.