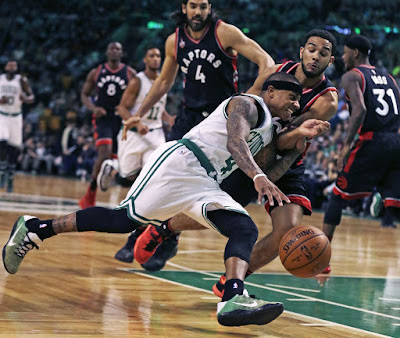 The Celtics came into the TD Garden on Wednesday night not only looking to avenge a loss from five days ago up north, but in fact make a statement against the Toronto Raptors with a win. They accomplished just that with a long road trip on the horizons, Boston might have gained more momentum with a 91-79 victory as they continue their climb back up the Eastern Conference standings.

All-Star Isaiah Thomas added to his month of March tear with another 20-plus point performance (23) to lead four C's in double figures. Evan Turner, who's also been on a roll as of late (third straight start), finished his night with 17 points and 7 assists, while Avery Bradley has found his stroke again, chipped in with 16 points and 8 rebounds. Amir Johnson recorded his second consecutive double-double with 11 points, 14 boards and dished out 5 assists to help the Celtics grab their third win in a row overall and 16th of the last 18 games at home.

Kyle Lowry did not play due to a sore right elbow and DeMar DeRozan struggled for most of the night as he went 6-for-16 from the field for 21 points on the night. Terrance Ross, who's been a pain in the C's side all season, added 13 points off the bench and Jonas Valanciunas returned to the line-up after missing four-games to chip in with 10 points and 7 rebounds for the Raptors who are now 48-22 and 2.5 games behind the East leading Cavaliers.

It was all tied up 46-46 at the half before the Celtics jumped out to the biggest lead of the night at that point 69-58 late in the third quarter. It was shortly lived as the Raptors went on a 10-0 run to start the fourth, taking advantage of Boston scoring drought (eight straight missed shots) in that span. Boston would then go on a 10-4 spurt of their own and grab a 79-72 lead and never looked back as they picked up their first win over Toronto in three-tries and snapping their four-game winning streak in the process.

This win ensures the Celtics will finish the season with at least a .500 record, clinching Brad Stevens his first winning season since being hired as head coach three-years ago.

"It's big," Thomas said. "We wanted some confidence and momentum going into this tough West coast trip and we got it. We wanted these three-games and we got them."

Boston now at 42-30 are tied with the Hawks (own tie-breaker) for the third best record in the Eastern Conference, will head out on a season-high five-game western swing beginning Saturday night against the Phoenix Suns. Tip-off is at 10 PM ET on Comcast SportsNet New England.

Celtics (44 percent) limited the Raptors to 34.8 percent shooting from the field, including going just 6-for-22 from behind the arc. Marcus Smart continued with his offensive woes as he shot 1-for-8 from the floor (2-of-19 in the last two games) for 2 points off the C's bench. Speaking of the second unit, they also struggled finishing the night with 15 points (5-for-18). Jae Crowder missed his sixth straight game nursing a right ankle sprain, but will travel with the team this weekend.