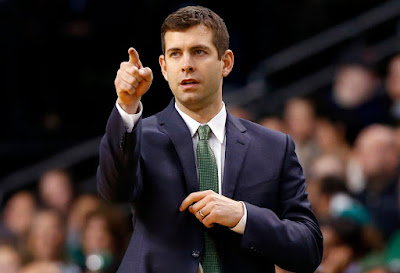 It keeps getting better and better for Boston Celtics' coach Brad Stevens as of late, who along with Portland Trail Blazers' Terry Stotts, were named today NBA Eastern and Western Conference Coaches of the Month, respectively, for games played in February.

Stevens, who grabbed his 100th win as an NBA head coach this past Saturday (click here to watch his celebration), led the Celtics to a 9-3 record (best in the East) last month including going 6-0 at the TD Garden. The C's scored 100-plus points in 10 out of 12 games averaging a conference's best 110.8 points per contest. With wins over Cleveland and Miami, Boston enters the month of March as the third best record in the East at 36-25.

Stotts led his Blazers to a 9-2 record in February, included a win over the Golden State Warriors and Memphis Grizzlies. They are currently tied with Dallas Mavericks for sixth place out in the Western Conference.

Both teams will meet on Wednesday night when the Celtics host the Blazers at the Garden. Tip-off is 7:30 PM EST.