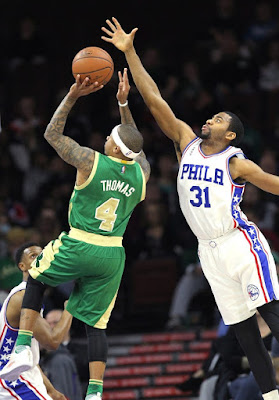 For a team that desperately needed a win, the Celtics got the job done in the city of brotherly love.

Losers of five of their last six games, the Celtics snapped a four-game losing by beating the Sixers, 120-105 in Philadelphia on Sunday.

Don't let the score fool you, the Celtics managed to pull away in the second half but the Sixers hung around until the fourth quarter. Philly pulled to within four points with 9:20 left before the Celtics went on a 16-6 run and closed out the win in the final minutes of the game.


"Our guys came out ready, came out focused," Celtics coach Brad Stevens said. "We knew it was an important game to play well. You can't always control the results, but you can control your input into it. Guys played with good purpose."

Johnson's interior defense provided crucial stops in the post and Turner returned to his old ways by filling up the stat sheet. He grabbed nine rebounds and dished six assists to go with his 17 points.


"We had some lulls, but for the most part we got some confidence back and got close to Boston Celtics basketball," Isaiah Thomas said. "Back to the winning ways as quick as you can to gain confidence and gain momentum going into the playoffs. We have to lock in these last 12 games."

With a win against the Magic on Monday, the Celtics could move up in the standings before they face the division-leading Raptors on Wednesday at TD Garden.

The Celtics shot 49 percent from the floor, including 41.7 percent from deep. Avery Bradley is back to shooting the ball well as he went 7-for-12 from the floor and 3-of-4 from outside. And the C's also out-rebounded the Sixers, 53-40.