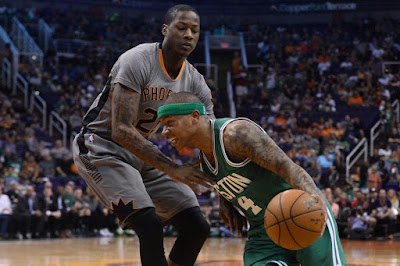 The Boston Celtics held on to beat the Phoenix Suns 102-99 after blowing a 21-point lead Saturday night at the Talking Stick Resort Arena.

Isaiah Thomas' 28 points lead all scorers, while Evan Turner finished with 17 points, 11 rebounds and a game-winning block. Kelly Olynyk added 16 points off the bench and Avery Bradley contributed with 15 points (after spending 48 hours in a hospital bed with an illness) to help the Celtics win their fourth in a row.

The Celtics had a comfortable 58-41 lead at halftime, and were up buy as many as 21 points. The Suns would go on a 16-2 run and Boston was barely hanging onto 81-75 lead heading into the fourth behind Thomas' 15 third quarter points

Phoenix kept it close the rest of the way as they cut a 10-point deficit to one with 1:16 left, and had a few opportunities to take a lead for the first time since the opening minutes of the night. With 15.5 seconds left and the Celtics up 100-99 Marcus Smart (9 points, 8 rebounds) and Thomas each made one free throw each after Turner made a crucial block with 2.3 seconds left.

Suns with a chance to tie the game and possibly head to overtime, did not get off a shot in time before the final buzzer.

"I'm just glad we got the win," said Thomas, who's his first shot of the night was an air ball and got called for a technical foul to start the game. "We came out playing well. That third quarter kind of hurt us and we sealed the deal. This time of year, no matter how you get wins, it's just about staying on top and we did that."

The Celtics are now 43-30 and find themselves a half game behind the Atlanta Hawks (44-30) for the third best record in the East. They will head to Los Angeles on Monday to face the Clippers. Tip-off is at 10:30 PM ET.

Boston only shot 41.7 percent from the field to the Suns' 43.5 percent for the night. Phoenix is now 30-71 since trading Isaiah Thomas at last season's deadline. Jae Crowder missed is seventh straight game with a high right ankle sprain, no word if he'll play at some point during this Celtics road trip.