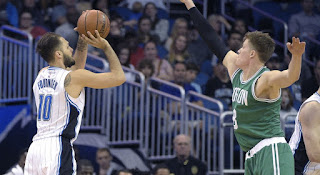 For a week, the Celtics have been playing without two of their most versatile front court guys -- Jae Crowder and Jonas Jerebko -- and as the C's gear up for a two-game home stand, one of those guys is expected to be back in action to face Evan Fournier, Aaron Gordon and the Magic.


Celtics coach Brad Stevens told reporters before Sunday's game against the Sixers that Jerebko didn't join the team for their two-game road trip to Toronto and Philadelphia so that he could nurse his injured Achilles and be ready to play on Monday. Jerebko will be in action on Monday, off the bench, backing up Evan Turner.

The last time the Celtics faced the Magic, Fournier and Gordon combined for 43 points and 17 rebounds in a game where the C's blew a 24-point lead in the fourth quarter of a 119-114 loss in Orlando. Coach Stevens is going to need Jerebko's help in guarding Fournier -- who has taken Tobias Harris' starting role at small forward since Harris was dealt to the Pistons last month.

Fournier is averaging 19.5 points in last two games. At six-foot-seven, he's an exceptional shooter (45.6 percent) and an outside scoring threat -- where he's shooting 40 percent this season.

The Magic are currently on a three-game losing streak -- they've dropped games against the Hornets, Cavaliers and Raptors. However, throughout that span, the Magic have been without their center Nikola Vucevic (groin strain). Orlando's starting center, Vucevic, is expected to miss his ninth straight game. The Celtics are catching a break in not having to face Vucevic -- who's averaging 17.8 points, 9 rebounds this season and is their most effective player.

The Celtics will still have to worry about the Magic's starting back court of Victor Oladipo and Brandon Jennings -- two guys who can catch fire offensively and stretch out scoring runs for the Magic. Especially Oladipo, who is coming off of a 21-point game against the Raptors and a whopping 45-point performance against the Cavaliers.

It will be the final meeting of the season between these two teams. The Magic have had the Celtics' number with a 2-1 record so far and will look to win the season series on Monday at TD Garden.