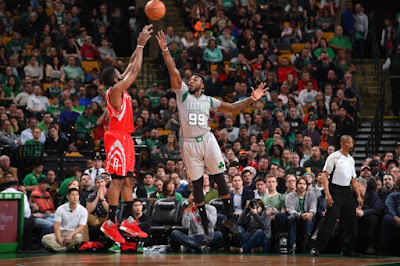 The Rockets defeated the Celtics, 102-98 and snapped the Celtics' 14-game home winning streak at TD Garden on Friday -- the franchise's longest streak at home since 1991.

James Harden scored 23 of his 32 points in the second half and Michael Beasley scored 18 points off the bench to lead the Rockets.

Trailing by only three points at halftime, the Celtics never grabbed a lead throughout the final two quarters. Jared Sullinger's back-to-back field goals trimmed the Celtics' deficit back to three points (91-94) with 3:34 left before Harden single-handedly closed out the game the C's on an 8-2 run.

Isaiah Thomas (30 points), Sullinger's double-double (24 points, 12 rebounds) and Avery Bradley (16 points) were the only Celtics that were close to scoring in double figures.

Offensively, the Celtics struggled. They were one run away from grabbing a lead in the fourth quarter but couldn't put it together. Although the bench combined for 24 points, individually, guys like Marcus Smart and Evan Turner couldn't find their offense. Turner and Smart combined for 12 points on 3-of-14 shooting.


"We couldn't hit shot," Thomas said. "Point blank, period. We were getting the shots we wanted, and they were just going in and out."

The C's were also slim in the front court after Jae Crowder's high-ankle sprain sent him to the locker room in the third quarter and was unable to return. Crowder, who was also not have a great shooting night (1-of-8), only scored four points before leaving the game but the Celtics could have certainly used his defense to deter Harden's scoring outburst.

However, Harden wasn't the only Rocket who was hot in the second half. Beasley, whose 18 points headlined the Rockets' 32 bench points, shot 9-of-19 in 15 minutes. Impressive for a guy playing in only his fourth NBA game of the season after an overseas stint in China.

The Rockets (33-32) have now won three in a row on their road trip and continue to fight for a playoff spot in the Western Conference. The Celtics will have a few days off before they travel to Indiana to take on the Pacers on Tuesday.

The Rockets' big men made life harder for the Celtics in the paint. The Rockets outscored the C's 60-46 in the paint and forced the Celtics to take shots from deep -- which didn't help spark their offense. The C's shot 25.8 percent from behind the arc on 8-of-31 shooting.