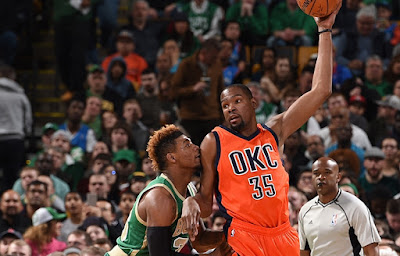 Kevin Durant demonstrated why he will be the most sought out free agent this summer.

The All-Star forward, alongside his All-Star teammate Russell Westbrook, annihilated the Celtics on their way to a 130-109 win at TD Garden. The Celtics have now lost three in a row and back-to-back games at home.

Oklahoma City opened up the game with an 18-6 run and took a 66-55 lead into halftime. Durant and Westbrook (17 points apiece) combined for 34 first-half points while the Celtics' poor shooting prevented them from making a significant scoring run before the break.

It got worse in the second half. The Celtics were rushing shots and couldn't score in transition while the Thunder scored in every way possible in the third quarter. The Thunder opened the second half with an 11-2 run en route to a 42-point third quarter -- the most points the Celtics have allowed in a single quarter this season.


"I thought we were going to have to play really well to have a chance to win and we didn't," Brad Stevens said. "They played very well. So all things combined is what happened and is the reason why we didn't have a chance in the fourth quarter.

"We just got pounded. So I think it's a credit to them. We have to play better, I actually thought our guys came out and competed. We could've done things better, but I thought we competed at the start, at least."

Durant capped off his dominant performance with a game's best plus-30 rating in only 30 minutes of playing time. Celtics fans at TD Garden started a "Come-to-Boston" chant in the second half as the soon-to-be free agent drained his eighth (of 9) and final free-throw of the night.

With Jae Crowder out, the Celtics need offense out of their bench leaders -- Evan Turner and Marcus Smart. Both guys struggled against the Thunder -- they combined for 6 points on 3-of-15 shooting, including 0-for-5 from deep. As a whole, the Celtics struggled from behind the arc -- they shot 26 percent on 5-of-19 attempts.

The Celtics managed to get their fast-break going but couldn't convert their opportunities into made shots. The C's missed layups, jump shots and or turned the ball over in transition. They finished the night with a measly 4 points fast-break points.

With the loss, the Celtics (39-29) are now tied with the Hawks for fourth place while the Heat are up by half a game for third. The Celtics will head up north to Toronto to face the Raptors on Friday.

Durant and Westbrook did most of the damage offensively but they weren't the only ones shooting the ball well for OKC. The Thunder's starting five all shot 43 percent or better while the team as a whole shot 49 percent on 47-of-96 shooting. They also knocked down 12 3-pointers to go with their 64 points in the paint.