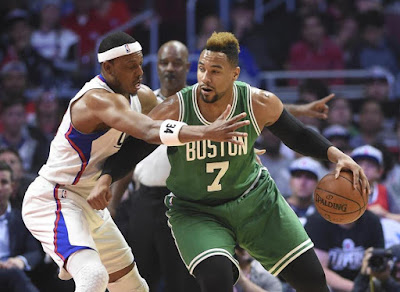 They say, "revenge is a dish best served cold." That probably was the Clippers' mind set on Monday night when they took into account the last time they saw the Celtics.

Chris Paul made sure Los Angeles did not have a repeat performance of a month and a half ago as he lead his troops to an easy 114-90 victory over Boston at the Staples Center.

Paul's 13 points and 14 assists in 26 minutes set the tone for the Clippers early on, while DeAndre Jordan posted 15 points and grabbed 13 rebounds for a double-double of his own. It was L.A.'s bench that would solidify the win for Doc Rivers, as four players finished in double-figures including son; Austin Rivers (16 points on 5-of-9 shooting) and Jamal Crawford (15 points on 5-of-12 shooting). Los Angeles, winners of three in a row, are now 46-27 on the season and currently the fourth seed out West.

Isaiah Thomas led the way for the Celtics with 24 points and one emphatic block on Chris Paul at the start of the game. Marcus Smart had a decent night finishing with 13 points, 5 rebounds and 4 assists in 24 minutes off the bench. Avery Bradley also added 13 points of his own as Boston has fallen a half a game behind the Heat at 43-31 for the fifth best record in the East.

With the Celtics only trailing 30-26 at the start of the second quarter, the Clippers went on a 22-8 run in the next eight minutes. By halftime, the home team's lead grew, 67-50 while shooting 59 percent and 64 percent from behind the arc. Boston would cut the deficit to 79-68 midway through the third quarter before Los Angeles went on a 13-2 burst. The Celtics never got to within single digits the rest of the way as their four-game winning streak was snapped.

"I thought the Clippers deserved a lot of credit for the way they made shots, the way they made plays," said coach Brad Stevens. "And then any time we got close we didn't play with any composure to get back over the hump."

Boston, now 18-19 on the road, shot only 35 percent from the floor while the Clippers made 52 percent of their shots on the night, a far different story from the last time these two teams met before the All-Star break (each shot 50 percent for a combined 273 points back on February 10).

Clippers finished the night with 29 assists on 44 made baskets to the Celtics' 14 assists on 31 made shots while Los Angeles' bench outscored Boston's 67-38. C's also tied their worst lost of the season at 24 points (see the Hawks).

Paul Pierce left the game with 2:06 left in the second quarter after scoring on a drive to the hoop. He sprained his right ankle and bruised his left knee on the play and did not return.

Jae Crowder missed his eighth straight game nursing a high right ankle sprain. He is scheduled to practice with the team on Wednesday for a possible return to the Celtics' lineup on Thursday against the Blazers.